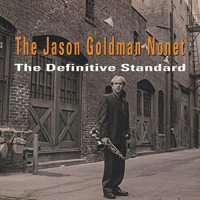 Saxophonist/bandleader Jason Goldman has undertaken quite a project for his first CD as a leader. He leads a 9-piece ensemble through intricate charts, including five original compositions and one by trumpeter Justin Ray, all arranged by Goldman. Goldman has received a number of honors, and this CD offers ample evidence why this young man garners such attention. He is a writer looking to be in the forefront of orchestral jazz.

Fans of Bob Brookmeyer, Jim McNeely and Oliver Nelson would be well advised to keep an eye on Jason Goldman. His writing, to my ears, bears the most similarity to Nelson in its use of ostinati. "Nadir Doofve", the leadoff tune, is an adventurous take on the changes to "There Will Never Be Another You," and includes a wild left-hand piano/bass interlude. Interesting textures like this pop up throughout the charts. "The Dancing Giant" follows, a quirky, humorous 16 bar blues with a wonderful trumpet solo by Michael Rodriguez. These two tunes are the most traditional, structurally, in terms of "head-solos-shout-head", though the "shout chorus" is anything but traditional, and are overall the most successful charts.

All of the soloists have ample room to blow. It helps to keep the sidemen happy when they're given a little extra space, and they all respond by playing difficult ensemble passages with accuracy and energy. This young ensemble makes these charts sound far easier than they are. This is a first class group. And first class writing.

"The Wizard" is Goldman's dedication to Herbie Hancock, one of his mentors. This tune opens with very Herbie-like figures, and displays a deep understanding of Hancock's harmonic thinking. This is followed by "Sonnet for Mother." Both of these tunes develop organically, not relying on any sort of conventional pre-set structure. Unfortunately there are moments where the focus lags, and both tracks seem to peter out rather than conclude. But that's a minor quibble when one looks at the amount of excellent writing and playing throughout the CD.

"Our Travels" is a lovely tune that features exquisite flugelhorn playing. Unfortunately the player isn't identified; only improvised solos are credited. The most adventurous of the charts is "Catch Me If You Can," with its stop-and-start tempo changes. It's a particularly strong performance from pianist Danny Grissett, both in his solo and in the ensemble passages, with wonderful support from bassist Josh Ginsburg. Goldman himself also plays a fine solo on this tune.

Excellent writing, strong ensemble playing, fine solos - this is an impressive debut from Goldman which foretells much fine music to come.