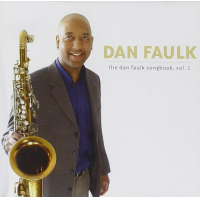 Dan Faulk falls into the same sure-footed category as saxophonists like Javon Jackson and Bon Braden who recorded frequently during the '90s alongside other while maintaining their own individual careers. Unlike the other two, Faulk has only recorded three albums under his own name. He has recorded on countless sessions as a member of groups led by J.J. Johnson, Steve Turre, Barry Harris, Tana Reid and Cindy Blackman. He is also the Director of Jazz Studies and a professor at SUNY Stony Brook. His earlier two records were released by Criss Cross Jazz and Fresh Sound. This third album appears on his own Ugli Fruit label in order to best showcase some of his more than 100 accumulated original compositions.

Dan Faulk's style on tenor sax can best be characterized as John Coltrane circa 1958 on Prestige, and that is not meant as a pejorative statement. When Coltrane later moved on to Atlantic and then Impulse, his attention to melody was not as strong as during his early sheets-of-sound period. Much of the material on Songbook was recorded shortly after 9/11, reflected by the titles of "Look for the Sun," "Violets for Tuesday," and "Vote" (which refers to a NYC primary mayoral election scheduled for 9/11/01). The ten compositions feature attractive melodies that are sturdy enough to warrent a complete album's worth of exploration. Faulk's three appearances on soprano sax, "Violets for Tuesday," "Dolores," and "Brotherly Love," show a strong melodic sense on the instrument. The latter is a change of pace in an R&B-ish mode that could have been a typical Grover Washington Jr. line.

"Hopscotch" is an up-tempo blues meant to reflect the stop-start motions of the children's game. "You (Thirty Years Ago")" is an up-tempo number with a Monkish melody. The appealing down-home blues on "Crawfish" prompts a very soulful Faulk solo, followed by a similar statement from bassist Ugonna Okegwo. "Waiting" is a warm ballad opportunity for Faulk, and the session ends with the spirited "Brotherly Love."

The remainaing trio of Carlton Holmes, Ugonna Okegwo and Will Terrill coheses quite nicely to provide the support and solo work that rounds out this album.