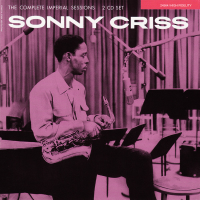 Had alto saxophonist Sonny Criss spent most of the time on the East Coast instead of settling in Los Angeles, he might have become more of a household name. In fact, it wasn’t until he made a series of sides for Prestige in the late ‘60s that he obtained even a modicum of the recognition due him, particularly through the magnificent Sonny’s Dream album. Unfortunately, by the end of the ‘70s he had met his untimely death at the age of 50. While Criss’ Prestige titles have been made available (with The Beat Goes On being reissued within the next month), his earlier work for Peacock and Imperial has been perennially hard to obtain.

Thanks to the folks at Blue Note, all three of Criss’ original Imperial albums have been collected on a new two-disc Connoisseur series reissue. All recorded in 1956, the original releases included are Jazz U.S.A., Go Man!, and Sonny Criss Plays Cole Porter. Sound quality for these West Coast sides is superb throughout, with Criss largely working as the sole horn in a small group format. In addition to such names as Barney Kessel, Kenny Drew, Leroy Vinnegar, Larry Bunker, and Lawrence Marable, these recordings also serve as a valuable missing piece in the meager catalog of pianist Sonny Clark, who appears on 22 of the 34 collected tracks. For the uninitiated, Criss might best be described as a cross between Johnny Hodges and Jackie McLean. He’s not quite as laid back as Hodges, but his tone is nowhere near as acerbic as McLean’s. The words “rich” and “romantic” come to mind. Anyway you describe it, this is some of Criss’ finest work and one of the best reissues of the year.

Willow Weep For Me, These Foolish Things, Blue Friday, Sunday, More Than You Know, Easy Living, Alabamy Bound, Something's Gotta Give, West Coast Blues, Criss Cross, Ham's Blues, Sweet Georgia Brown, Summertime, Memories of You, Wailin' With Joe, How Deep Is the Ocean, The Blues For Rose, The Man I Love, Until The Real Thing Come Along, Blue Prelude, After You've Gone, Come Rain Or Come Shine, How High the Moon, If I Had You, I Love You, Anything Goes, Easy To Love, It's All Right With Me, In the Still of the Night, Love For Sale, Night and Day, Just One of Those Things, What Is This Thing Called Love, I Get a Kick Out of You