By MIKE NEELY
September 9, 2009
Sign in to view read count 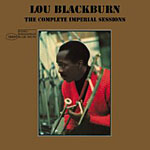 The Complete Imperial Sessions presents a tight West Coast band with a bluesy East Coast sound. There is the best of both worlds in this fine quintet with its well-balanced soloists and outstanding rhythm section. Blackburn is a sharp band leader whose sophistication is evident throughout these sessions; he brings to the table eleven original compositions and a band that can turn on a dime. Blackburn adds to the mix a soulful, full bodied trombone that is at home with the blues.

Of course it helps a bandleader if your pianist is Horace Tapscott and your trumpeter is Freddie Hill. Texas and Florida were their home states, and Blackburn was born in the Pittsburgh area. These details help to explain the blues orientation and gritty drive of many of the tracks. The lesser-known bassist and drummer, John Duke and Leroy Henderson, both played with a variety of established R&B and jazz groups. Duke later found his way into the Count Basie Band, and Henderson disappeared from the jazz world not long after these 1963 sessions.

It should be noted that Henderson's performance on these recordings is exceptional; he is a classy drummer with the authority and the drive to direct this band from below. The Henderson/Duke/Tapscott rapport is of continual interest to anyone curious about why these Imperial Sessions are so successful. Tapscott's accompaniment to any solo is worth a careful listen. He shifts from accompaniment to his own solos with the same level of intensity and precision. In short, this is early Tapscott in a traditional Blue Note mode and he is impressive.

Freddie Hill is the lead soloist of the group, consistently demonstrating full command of the trumpet with a rich, full-bodied sound, no matter what the range or tempo. His solos are concise and intelligently developed throughout. Blackburn's arrangements are also notable: the combination of Hill and Blackburn playing together above a first rate rhythm section adds an exciting dimension to this versatile band and to this highly recommended recording.