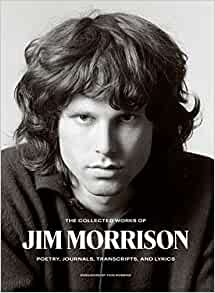 As Jim Morrison's career evolved over its egregiously abbreviated lifespan, the lead vocalist for The Doors became as ambivalent about his image as the image itself turned ambiguous. From obscurity to celebrity to notoriety and back again—at least relatively speaking within the fold of the quartet from 1970 on— an adoring audience had no choice but to follow: the circumstances leading up to and in the wake of the mythic Miami incident were akin to the proverbial drivers-by slowing to observe an auto accident.

Prior to and within that very sequence of events, the object of their worship in turn courted, ridiculed and repulsed them for that very idolatry. Morrison was acting out the role of rock band frontman he initially reinvented, then succumbed to the temptations thereof and, in subsequently shattering its boundaries and expectations, partly by the scope of his writing as contained within The Collected Works of Jim Morrison: Poetry, Journals, Transcripts, and Lyrics, he was ultimately forced to confront how he became, in his own words on a song from Strange Days (Elektra, 1970), 'a prison of his own devise.'

Prior to his death, Morrison self-published three limited-edition volumes of his poetry, while Simon & Schuster issued the combined works as The Lords and the New Creatures in 1970. Posthumous editions of Morrison's writings have come out in the half-century since his unexpected (?) passing, but as indicated in the title of this five-hundred eight-four page tome, this weighty publication is a comprehensive composite of varied content, more or less shaded by notes from the author himself as well as footnotes that provide some additional illuminating context. But perhaps no more so than the many reproductions of loose-leaf notebook pages (and covers) as well as a scrap of an envelope, in Jim's own handwriting: he was nothing if not prolific.

This may or may not be a book designed to read cover to cover—the narrative is only implicit—but if it is for some readers, that may only be inadvertent: poring over the pages can seem like an exercise in frustration until, inevitably, a memorable line or sometimes just a vividly imagistic phrase leaps from the page(s). The depth of impact deriving from thought-provoking quotient will, again, depend on the reader (who may or may not be a fan). Yet if this collection proves anything, it is that Jim Morrison would have benefited from some reliable mentorship during his lifetime in his writing. Supply of such focus from an objective third party might have ensured he developed the instincts governing his quicksilver impulses and thus more regularly bring hem to bona fide literary fruition. For instance, the editing could have taken the form of extracting and polishing sections, like these excerpts from journals referencing 'The Soft Parade,' which eventually became the title of the fourth Doors album, released in 1969.

A more discriminating approach would aid in fine-tuning the products of an imagination erratic in its brilliance. Short-circuited trains of thought do not just surface in the long-form likes of "Celebration of the Lizard," (excerpts from which appeared from a failed attempt to record as a whole on the third Doors LP, Waiting for the Sun (Elektra, 1968), the work later to appear en toto on Absolutely Live (Elektra, 1970). Arising from deceptively scattershot combinations of words, the implicit themes and overt symbology that permeate Poetry, Journals, Transcripts, and Lyrics hearken to ceremony and ritual, an almost absurd irony considering the author as a man to try and destroy so many such institutions and norms in his time. Then there are the allusions to media (not just the cinematic one to which he was drawn), the inference therein that society too often indulged in devoted saturation in same for base ends rather than enlightenment: see the 1968 Art Kane photo with a TV (unfortunately not included here).

Intentionally or not, its cover is fully indicative of the mercurial nature of this book's subject. The baleful gnomish gaze in the photo on the front of the dust cover (with its raised glossy finish lettering) gives way to something quite different on the hard cover proper: the full name of 'James Douglas Morrison' is imprinted on the black rough finish above the full title. Intentionally or not, the funereal combination of color and design brings to mind a gravestone. It is roughly a hundred pages in, at the appearance of "Ode to LA while thinking of Brian Jones, Deceased," before it occurs there is precious little, if any, direct emotional expression in this writing (an exception appears on page twenty-eight in the form of some high school level doggerel). In that regard, the stoic tone mirrors Morrison's vocal delivery and phraseology as a singer.

Of course, that's only appropriate for The Collected Works of Jim Morrison published as it is (deliberately) near the fiftieth anniversary of his demise. Such oblique connections may perhaps represent projections from direct experience or merely something of a Rorschach test (as with all such interpretations). But that too may be the author's intent as the man wasn't averse to whimsy, particularly in his later days (see the six-CD box Live in New York (Rhino, 2009).

Jim Morrison's explanatory (sic) notes throughout the book are unfortunately not all that edifying. He was apparently all too often perfectly satisfied with the immediate results of his inspiration, seeming to think those expressions would grow in substantive meaning through metamorphosis over time and with historical event (he did after all write a song called "The Changeling," appropriately leading off the last Doors record on which he appeared. L.A. Woman (Elektra,1971). As included largely in the section of lyrics, mostly familiar photos reinforce stereotypical memories—though the convivial air in group shots during recording of An American Prayer (Elektra, 1978) are quite the contrary in their novelty—while family stills from this revered/reviled figure childhood belie the his later denial of such early years.

Jim Morrison often worked in broad strokes, perhaps no more so than in his song lyrics, one of four main sections of the book. But he could apply an eye for detail in his film work, nurtured at UCLA film school, as evidenced by the screen treatment for the unreleased movie The Hitchhiker (a sequel to the 1970 exercise in cinema HWY: An American Pastoral). The Collected Works is rife with two-line aphorisms: it's almost as if Jim was hoping to be quoted. Yet the fact of the matter is, however much he wanted his work to be taken seriously, he too often undermined that very sentiment by refusing to take himself too seriously. To this day, the general public, including his most abject devotees, may fail to make that distinction, an unfortunate tendency the artist himself was beginning to curtail later in life.

Consequently, even given this half-century commemoration of a genuinely profound milestone, Poetry, Journals, Transcripts, and Lyrics is unlikely to change perceptions of the subject(s) therein. The so-called 'Lizard King''s was a story too full of archetypal themes—the inexorable pull of fame, the compelling seduction of self-indulgence, the simplistic portrayal of mass media—to readily process, much less categorize with a glib catchphrase. Nonetheless, for both the aficionado and the dilettante, just a cursory scan thereof, perhaps coupled with at least a modicum of honest reflection upon The Collected Works of Jim Morrisonmay induce the belief its subject/author was then and is now the very embodiment of cautionary tales aplenty, his book a veritable roadmap in, out and around that nether world .