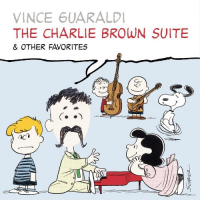 New Age star pianist George Winston has collected tapes of eighty hours of previously unreleased recordings by the late pianist Vince Guaraldi, who died in 1976. Winston recently made these tapes available to Guaraldi's son David. Although the elder Guaraldi recorded this material for Fantasy and Warner Brothers, its current custodian is releasing the first batch of the Winston collection on BMG/RCA/Bluebird.

Guaraldi's music for the Peanuts cartoons has been released on four albums: A Boy Named Charlie Brown, A Charlie Brown Christmas, Oh, Good Grief! and most recently Charlie Brown's Holiday Hits. This album provides a different interpretation of the familiar songs.

The Charlie Brown Suite is a 39 minute recital of seven songs Guaraldi recorded in May of 1968 with Amici Della Musica, a chamber ensemble. Although the recording hall was a nightclub, the sound is that of a church concert. For a jazz album, the effect of the string arrangements is remarkably peaceful.

Three other recordings flesh out the album. "Linus and Lucy" is recorded with a brassy big band. I hope there is more to come from that session! "The Charlie Brown Theme" is apparently an alternate take from Guaraldi's 1969 Oh, Good Grief! session, which featured the harpsichord. The album closes with a nearly seven minute concert rendition of "Cast Your Fate to the Wind," on which guitarist Eddie Duran contributes valuable harmonic and rhythmic support.

This music is very accessible, and it should make an excellent Valentine's Day present to be enjoyed long after the chocolates and flowers are gone.