By John Sharpe
September 17, 2016
Sign in to view read count 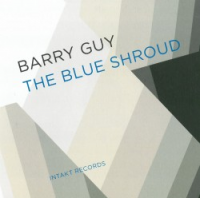 In some ways, The Blue Shroud might be Barry Guy's signature work. It's the first to unite his varied interests in Baroque music, composition, jazz and improv at an orchestral scale. To do so Guy assembles a 14-strong crack unit capable of interpreting each aspect to the highest level, including several early music specialists who are also able to extemporize.

And Guy's topic is worthy of such endeavor. He takes as his inspiration three interlinked themes, the Spanish Civil War atrocity at Guernica, Picasso's masterpiece of the same name, and the titular blue awning hung over a tapestry of that painting which was the backdrop when US Secretary of State Colin Powell set out the case for the invasion of Iraq at the UN Building in 2003.

Given such weighty subject matter it's tempting to try to view everything through a programmatic lens, but many passages defy simplistic determination. It's just compelling music. As always Guy's charts promote opportunities for individual expression, and the wonder is how well they flourish within the notated framework. But of course that has been Guy's specialty ever since his formation of the London Jazz Composers Orchestra back in the day.

The work's interlocking and overlapping sections have been demarcated into 11 tracks which help the listener navigate the structure. In "Prelude" Guy sets out some of the building blocks which recur throughout the piece. It begins with Percy Pursglove's unaccompanied trumpet reveille, which is joined by a bristling ensemble before an abrupt switch to drifting strings. Thereafter the piece evolves through sudden dizzying shifts and kaleidoscopic textures, in which the diverse styles coexist on their own terms.

Starting with a mercurial exchange between Agusti Fernandez' piano and Pursglove's trumpet, "Bull / Mother and Child / Warrior" comprises a series of improvised duets and trios, mixed with orchestral interjections. Later after an initial martial cadence, "Light Bearer" turns jazzy, with Michael Niesemann's alto saxophone ramping up the intensity in a tour de force for the reedman's thickened vocalized wail, and the orchestra metamorphoses into a surging big band behind him.

The group of Ben Dwyer's Spanish guitar, Savina Yannatou's voice and the leader's bass plays a key role, and appears at the heart of the sections denoted as "Songs." Here Guy creates lyrical backdrops for Irish poet Kerrie Hardie's text, sung/spoken with great emotional weight by Yannatou. Elsewhere she uses her wordless voice to convey confusion, fear, anguish and defiance. At other times she also intones the words "Resolution 1441 and "Weapons of Mass Destruction," as Hardie encourages insertion of excerpts from the UN Resolution into the performance.

To offset the spiky improv and dense ensembles Guy co-opts some of the loveliest melodies ever written, creating settings for extracts from H.I.F. Biber's "Mystery Sonatas" and J.S. Bach's "B minor Mass." In this context, Guy uses these reimaginings to signify humanity, indomitable spirit and ultimately hope. At over 70-minutes, The Blue Shroud constitutes a complex and expansive work. While there is a lot to take in which requires repeated listens to appreciate, the payback is more than worth the effort.