Charles Mingus: The Black Saint and the Sinner Lady

By Robert Spencer
June 1, 1997
Sign in to view read count 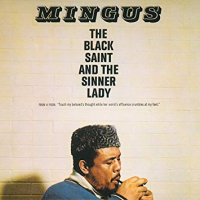 Some Mingus albums are like a tremendous three-ring circus. You’ll laugh, you’ll cry, you’ll be struck with awe and delight. The music is absorbing, intense, harrowing, beautiful. Drop everything and run to the show, and don’t expect to get anything else done at the same time: this is about as far from background music as it gets. A great Mingus album is a totally involving experience. This is especially true of one of the only jazz albums to have liner notes written by a clinical psychologist: The Black Saint and the Sinner Lady. Mingus chimes in with a peroration of his own, too, including, "I feel no need to explain any further the music herewith other than to say throw all other records of mine away except maybe one other [unnamed]." Anyone tempted to take this advice should be committed to the observation ward at Bellevue Mingus graced with his presence not long before making this record, but the music itself deservedly holds its creator’s high estimation.

The Black Saint and the Sinner Lady is a six-part suite (four CD tracks) recorded in 1963. Impulse has given it the 20-bit treatment; few recordings have been more deserving. This suite is a feast of virtuoso performances, shifting moods and textures, and detailed background work by Mingus’ eleven-piece band. Jerome Richardson is heard to great effect on baritone sax near the beginning of the work; he contributes some beautifully supportive flute (with Dick Hafer) and soprano elsewhere. Quentin Jackson’s trombone work is arresting, and the other hornmen (Rolf Ericson and Richard Williams on trumpets, Don Butterfield on tuba, Hafer on tenor sax as well as flute) are excellent. But the pervasive voice of the entire piece is Charlie Mariano on alto saxophone. Mariano’s playing is wrenchingly emotional and evocative, conveying pathos, fervor, and undying conviction. But as wonderful as Mariano’s work is here, this is very much a group effort. Especially in the last three sections (CD track four) of the piece, this is music of group interaction. Solo voices emerge from the welter and are drawn back into it. Occasionally the ferocity of each voice clamoring with the others reaches such a furious intensity that it would take just one more step for it to reach the world of the medium-sized group free jazz that would be recorded not long after this album: Albert Ayler’s New York Eye and Ear Control, Coltrane’s Ascension, etc. Then in an instant the ensemble stops on a dime with a unison statement executed with high-energy precision. It is an extraordinary thing to hear.

The rest of the ensemble includes Mingus on bass and, briefly, piano; Jaki Byard on piano; Jay Berliner with a marvelous flamenco guitar bit; and the incomparable Dannie Richmond on drums. This is a masterwork that should be part of any jazz collection, except perhaps of those listeners who prefer that music not challenge, inspire, and move them.