Too Blue Lou and the Groove: The Birth of Hip Bop

By WOODROW WILKINS
August 1, 2008
Sign in to view read count 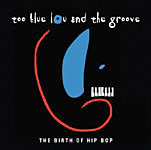 Not all attempts to blend jazz with rap are successful. Often, it's R&B or hip-hop packaged in a way that fools people into thinking it is jazz when it isn't. Once in a while, a merger of these genres works. The Birth of Hip Bop, by Too Blue Lou and the Groove, is one such merger.

This small ensemble describes itself as a unique blend of groove-oriented improvisation, scat vocals and rap, played over heavy beats and a traditional walking bass. The group is led by Lou Montelione on keyboards and vocals.

With Eric Huff on sax, Daisuke Abe on guitar and Roy Weinberger on drums, "Never Gonna Give Up" sets the tone. Huff leads with a funky jazz sax style similar to that of Maceo Parker. Abe then contributes a slick guitar solo. Montelione follows with a freestyle keyboard solo. The song has a cool bass line as well, but there is no credit given for a bassist. Guest artist Mike Aidoo contributes a rap near the end of the song; he also sings and scats.

"Hip Bop & Scappy" might also be called slap-happy. This finger-snapping, toe-tapping groove features each member of the quartet prominently. Huff wails like Sanborn and Abe, Montelione and Weinberger get their solos in too. When all four are playing, they're a tight unit, with the other musicians complementing Huff's lead. Montelione joins Huff with a vocal scat toward the end.

"Blue in Green," covering a Bill Evans/Miles Davis tune, has a happy blues feel to it. The band swings behind Huff's lead. All the players make it seem as though they're playing for the simple joy of playing—a characteristic present in several songs.

All eight songs are near or above the six-minute mark, giving the musicians plenty of time to play. Oddly, that's the album's one glaring weakness. Several tracks seem to go on too long after the solos. The melodies are repeated ad infinitum before a vocal scat or rap sets up the endings. It's at this point where Montelione, Abe or Huff should ad-lib more, like the end of a Steely Dan song. Apart from that, The Birth of Hip Bop, as the saying goes, is all good.

Never Gonna Give Up; Nardis; Hip Bop & Scappy; Groove One for Fun; That Situation; Stella By Starlight; Ode to Knee Deep; Blue in Green.

About Too Blue Lou