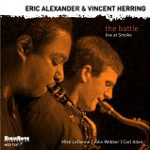 Without a doubt, Eric Alexander is one of the most hardworking and serious young tenor saxophone players out there. To see him perform live is to witness technical fluency combined with up-tempo and hard boppin' intensity. This recording, taped live at Smoke in New York, finds him joined by the equally talented Vincent Herring on alto sax.

The first track sets the stage for the whole session. "Blues Up And Down is the classic stomping blues showcased by Gene Ammons and Sonny Stitt on Boss Tenors (Verve, 1961), but with a few added harmonic curveballs. Since Alexander and Herring play different instruments, the final exchanges between the two demonstrate their ability to feed off, rather than upstage each other. In that sense these two musicians are not engaged in an actual battle, but rather a motivational exercise that puts them both at the top of their game.

They do the same in an easy tempo on Wes Montgomery's "Road Song, with bassist John Webber laying down the structure and Mike LeDonne showcasing piano voicings that some have associated with to McCoy Tyner. "Ritual Dance, a composition by the drummer Carl Allen, lets Eric Alexander draw from his Coltrane influences by double-timing on his solo and even throwing in a quick reference to "Mr P.C." "Shirley's Song provides a relaxing ballad before the group ends the "battle just as it started, with "Eleven Years.