By BRUCE LINDSAY
September 17, 2010
Sign in to view read count 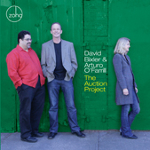 Altoist and composer David Bixler leads The Auction Project, with Grammy-winning pianist Arturo O'Farrill, who has described this album as being "very much about colliding cultures." This may slightly overstate things but the album does represent what is, for jazz, a rather unusual meeting of cultures.

Half of The Auction Project is devoted to Bixler's compositions, while the other half features tunes from the folk canon of the British Isles—the island of Ireland in particular. The key musician on these tunes is violinist Heather Martin Bixler; her playing is technically skilful and, while she does not have the spark of magic to be found in fiddlers like Dave Swarbrick, her playing does reflect a clear love of the music.

"She Moves Through the Fair" is probably the best-known of the folk tunes. As with many traditional tunes, there is debate about its origins—the words were likely written by Irish poet Padraic Colum, and musicologist Herbert Hughes may have written the melody rather than simply collecting it. It's been recorded many times—most notably in beautiful genre-fusing versions by folk-rock pioneers Fairport Convention and seminal guitarist Davey Graham. It's even been covered, somewhat blandly, by Wayne Shorter, on Alegria (Verve, 2003). Martin Bixler plays with empathy, while saxophonist Bixler and O'Farrill's chords help to emphasize the story's inherent mystery.

"The Chicken Went to Scotland" begins cheerfully, Martin Bixler adding a touch of syncopation to her playing that gives the tune an added lift, but O'Farrill's opening chords disrupt this mood and the tune soon loses its early cheer. "Banish Misfortune" and "Heather's Waltz Part 2" are more successful; the violinist reflecting an understanding of the tunes' emotional qualities. O'Farrill's delicate accompaniment on "Heather's Waltz" is light and refreshing, while he moves beautifully between this folk-style accompaniment and his more familiar, percussive, Latin style on "Banish Misfortune."

"Worth Dying For" is stunning: Bixler plays a slow, intense and lovely alto part, backed only by Vince Cherico's sparse tom toms and cymbals. The tune stands out from the others in its style, mood and arrangement—a very emotive and personal performance.

The idea of "colliding cultures" suggests some fractured, explosive—even destructive—music but, in fact, The Auction Project is an altogether gentler affair. The cultures meet and interact on friendly terms: sometimes keeping a respectful distance; sometimes getting up close and personal. A dance, rather than a collision.