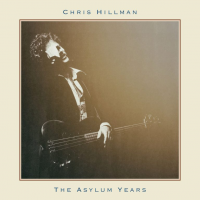 Chris Hillman is a rare musical artist indeed. Not only is he a multi-instrumentalist as capable as he is versatile plus an engaging lead and harmony singer, he's also a songwriter well-versed in a range of music including folk, rock, bluegrass and country. Of equal and perhaps even greater importance is Hillman's ability to forge a bond between collaborating musicians so that their efforts gain genuine unity: the ill-fated Souther/Hillman/Furay Band is the exception to this rule he established so formidably with the middle-period Byrds, the formation and continuation of the Flying Burrito Brothers and his second-in-command position in Stephen Stills' Manassas and one he continued to exercise throughout his Tom Petty-produced 2017 studio album, Bidin' My Time.

It should come as no surprise those varied virtues are so readily apparent within the single CD reissue of Chris Hillman's first two solo records, but he's also very appropriately pictured on the cover as the perennially-prepared, good-humored and bemused musician, a persona that lent itself well to his shepherding of a large ensemble of accompanists on the first of the two records here, a star-studded affair, featuring members of Booker T. & The M.G.'s, Poco, Buffalo Springfield, The Turtles, all in addition to some ace studio musicians.

As originally produced and mixed by renowned engineers Ron and Howard Albert (Eric Clapton, Allman Brothers Band, Jimi Hendrix), the sheen and punch of sound remains and, in fact, becomes magnified via Michael Romanowski's remastering for this release. And rather than sound dated in any way-even the sounds of synthesizer are tasteful-there's no taint to an archetype of style that echoes so vibrantly in today's Americana genre; Stills' "Witching Hour," a composition from the aforementioned Manassas era that went unreleased at the time, is just one examples of the eclectic blend of influences that remains authentic to its roots.

It's no surprise the alliances Chris Hillman forged in turn influenced others in the short term too and culls from his efforts just prior to these early Seventies solo works reside comfortably in juxtaposition with each other here. Even in its au courant (for the time) reggae-arrangement, "Down in the Churchyard" is readily-recognizable as a writing collaboration with Gram Parsons off the Flying Burrito Brothers sophomore album, Burrito Deluxe (A&M, 1970), while the prominent presence of multi-instrumentalist Al Garth brings a tangible air of vintage Loggins & Messina (in which ensemble he participated) to Hillman's second effort under his own name, Clear Sailin'.

A more finite group coalesced around Chris for this project, some of whom he took on road and eventually coalesced into the eminently successful latter-day hybrid outfit Firefall. Including Rick Roberts, from later lineups of the Burritos as well as drummer of that band and the Byrds Michael Clarke, there's little discernible difference in the solidity of the musicianship, which is credit to producer Jim Mason, but perhaps even more so to Hillman: his role of bonding agent is perhaps most obvious in the smooth, casual delivery of his singing, especially nonchalant as he sounds on the (autobiographical ?) "Fallen Favorite."

The mix of material isn't quite so discerning as on the preceding album however. Hillman's own sturdy tunes, such as the wry "Nothing Gets Through," sound of a piece with those of Danny O'Keefe ("Quits") and William "Smokey" Robinson ("Ain't that Peculiar"), but a somewhat more homogeneous air appears during the course of these ten cuts, afflicting other outside song choices like "Heartbreaker" and even the heartfelt original "Rollin' And Tumblin'" (it is not the Skip James blues).

Chris Hillman's own understated but nonetheless forceful personality nevertheless resonates through most of The Asylum Years, perhaps most resonantly (and emphatically) in the airy, closing title-song of the second album. Including the artist's own perspective on this work in the dutifully-annotated booklet, the package is thus worth owning along with the rest of this unsung musical hero's efforts because it adds to his stature as one of most undeservedly unsung heroes of contemporary music.

Step On Out; Slippin’ Away; Falling Again; Take It On The Run; Blue Morning; Witching Hour; Down In The Churchyard; Love Is The Sweetest Amnesty; Midnight Again; (Take Me In Your) Lifeboat; Nothing Gets Through; Fallen Favorite; Quits; Hot Dusty Roads; Heartbreaker; Playing The Fool; Lucky In Love; Rollin’ And Tumblin’; Ain’t That Peculiar; Clear Sailin’.