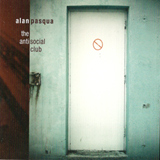 Pasqua's 1970s stint in Tony Williams' New Lifetime, alongside guitarist Allan Holdsworth, helped set the stage for this assertive effort. Heavily influenced by the fusion-era work of Miles Davis, The Antisocial Club blends In A Silent Way-inspired atmospherics with On The Corner-styled grooves.

Alternating between liquid smooth grooves and raspy electronic outbursts, Pasqua and company update classic fusion clichés with ardent commentary and supple lyricism. "Prayer" and "Message To Beloved Souls Departed" represent Pasqua's introspective side, while the Jekyll and Hyde vacillation of the title track and the relentless metallic grind of "Fast Food" showcase a more aggressive aspect.

The Antisocial Club is a high watermark in a growing number of records stylistically indebted to the Dark Prince's seminal electronic period. Although no new conceptual ground is broken, for fans of Miles Davis' late 1970s work, the groove is deep and the funk is nasty.