Dialectical Imagination: The Angel and the Brute Sing Songs of Wrath

By Karl Ackermann
January 6, 2018
Sign in to view read count 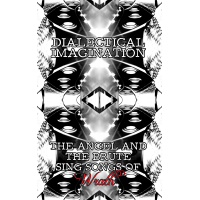 A California native, transplanted in New York, Wallace has a broad background that includes jazz, rock and classical music. He studied with Jason Moran and Jerry Bergonzi in route to a Master's of Music at the New England Conservatory. Pumpelly, originally from Georgia, had previously worked with Wallace in a group called Will Redmond's Transcontinental Blow-Up Telethon. In addition to being a percussionist, Pumpelly is an accomplished bassoonist and guitarist. His two albums with Dialectical Imagination are instrumentally confined to drums.

The four track program is book-ended by the lengthiest pieces, "Autopoietica I" and "Strength and Presence" at approximately ten and fourteen minutes respectively. Both are highlighted by Pumpelly's intensive and rhythmic attack, interplayed with Wallace's alternating torrent of notes and thrashing propulsion. While ...Songs of Rapture had its share of dissonance, it was bended with opulent lyricism to a greater extent than Wrath. The new album is not devoid of melody; the boisterous, somewhat disjointed piano on "Hatch(ling)" and much of the classically influenced "Autopoietica II" provide some "rapture," similar to that of the debut.

At less than thirty-five minutes, ...Songs of Wrath is a brief, but intense outing, released as a faux cassette tape housing a USB flash drive. One of the phenomena of Dialectical Imagination is their ability to create a sound far larger than two musicians typically generate with simply an acoustic piano and drums. Given the overall speed of reactions and rapid pace of these pieces, it becomes easy to overlook both musicians' ability to incorporate moods from near-lyrical to frenetic. However, it's all incorporated—if not equally—in The Angel and the Brute Sing Songs of Wrath. Two albums along, Dialectical Imagination shows increasingly boundless potential with their forward moving creations.