By Roger Farbey
February 22, 2019
Sign in to view read count 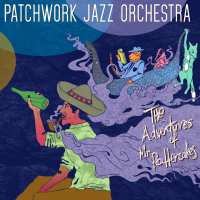 Maybe the quickest way to sum-up Patchwork Jazz Orchestra's The Adventures Of Mr Pottercakes would be to appropriate the title of The Who's 1971 compilation album, Meaty Beaty Big And Bouncy. For that is exactly what it is and quite a bit more besides. From the very start of the opening title track, there's a reminder of that other big band of young British jazz musicians, Loose Tubes. But since so many of today's leading British jazz musicians emerged from the Tubes' collective there are inevitably going to be some residual influences around. This fleeting resemblance to their jazz forbears is not sustained since this seventeen-piece big-band possesses its own characteristic sounds and devices. It also enjoys an abundance of virtuosic talent. But the underlying influences are actually quite diverse in range. For example, James Davison's dirge "The Boy Roy" could have been a Duke Ellington or Charles Mingus-inspired composition. The semi-lugubrious mood is no doubt assisted by the heavy brass interventions from Jamie Pimenta, Yusuf Narçin and Tom Smith.

The dramatic "Badger Cam," with atmospheric plectrum-plucked bass guitar, could be ripe for use as a film score but is palpably successful in its own right. Tom Green's composition channels the likes of John Dankworth's famous big bands and there's a vibrant bluesy guitar solo from Rob Luft. Misha Mullov-Abbado's complex composition "Hi Wriggly!"—which certainly exudes serpentine qualities—is a reflection of the bassist's prior achievements, including two excellent albums under his own name for Edition Records, Cross-Platform Interchange (2017) and New Ansonia (2015).

Scott Chapman's sophisticated "Mind Palace" benefits from robust solos from, amongst others, Tom Green on trombone and Liam Dunachie on piano. Kieran McLeod's stately brass intro is succeeded by a gradual build-up to a crescendo, peaking with a coruscating guitar solo from Luft. The album's outro, "Liam's Ending," isn't listed on the album as it's just a short scherzo preceded by thirty seconds of silence, but it may be a little early for the lads to be employing Sgt Pepper-type phantom endings. However, that can be overlooked considering the magnitude of their collective achievement. This is an unequivocally excellent album that invites repeated plays and offers the prospect of even greater things to come from this buoyant big band.