By HRAYR ATTARIAN
February 7, 2017
Sign in to view read count 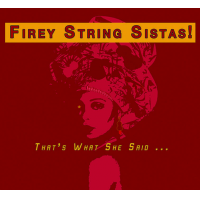 The innovative and versatile cellist Nioka Workman leads the, New York based, dynamic ensemble Firey String Sistas, on the group's captivating sophomore album. The delightful That's What She Said... consists of eight originals that explore various styles with a jazzy sensibility and thematically cohesive manner.

The tracks range from the soulful to the stately veering occasionally into Latin territory. "Adversidad" is a wistful, passionate melody that violinist Marlene Rice plays over the hypnotic, sashaying beats of the band. Workman bows her strings with facility and grace endowing the music with a melancholic romanticism. Pianist Mala Waldron follows with a refreshingly crisp and equally lyrical solo before Rice returns to the tune's head.

On the whimsical "T'Ainchy Blues" Slocum takes center stage with a playful improvisation that dances around Colis' soft beats. The latter takes her turn in the spotlight with thrillingly thunderous polyrhythms. The song also showcases Rice's ardent and lithe acrobatics and Workman's superbly eloquent extemporization.

There are rare moments where the momentum slacks such as on the overly syrupy "Castles in the Sky." The disc, however, closes on a high note with the rousing and boppish "To the Holy Land." The elegant and stirring piece highlights the seamless camaraderie among the quintet members as each individual instrumental statement overlaps with another forming a highly satisfying and textured performance.

That's What She Said... is a charming and delectable work by five supremely talented musicians. It is simultaneously accessible and sophisticated, poignant and erudite and, as such, should have a wide appeal. It certainly whets the appetite for more to come from this exceptional collective.