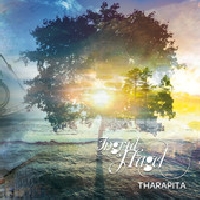 Tharapita is a delightful recording that ultimately beguiles the listener through its emotional outlook and sheer gorgeous sound.

Ingrid Hagel hails from Estonia and, as she states on her site, "Tharapita" is the name of a thirteenth-century northern Estonian tribal god, which has been incorporated into the culture to "evoke the unity between man and nature." Living now in Copenhagen, Denmark with its hustle and bustle, the music is Hagel's attempt "to recreate the sensations, colours and landscapes of my childhood's country house and its surroundings."

It is quite surprising, therefore, to be presented with music that sounds nothing like what one would (naively) think should come from a northern Baltic country quite near Finland. In fact, the album has a lilt that borders on Brazilian (e.g. fusion or world) and which meshes quite nicely with the summery images that pervade it.

Hagel's childhood musical training was mostly classical violin, but she ultimately decided to study jazz in Denmark, starting with voice and later bringing in the violin. Her vocal and violin sound are both on the dry side, using very little vibrato but with very accurate intonation.

The music has a deceptive simplicity; it feels very wide and translucent, inviting the listener to partake of these re-imaginings of Hagel's Estonian memories, all the while smiling and gently rocking. The album has a cumulative effect as it draws in the listener.

Some listeners might prefer more purely instrumental music like "Midsummer's Eve"; there is no doubt that this band could produce large-scale, intricate tone poem pieces. Others might want music that is more abstract and more intense -there are plenty of sections that get underneath and behind the song -and the last track, "Call of Tharapita" (unfortunately misspelled 'Thatapita' on the liner), gives a hint what could happen if the band wanted to go in the direction of freer improvisation.

Tharapita is a completely honest and refreshing album signalling much interesting music to come from Hagel as she explores and grows. Highly recommended.