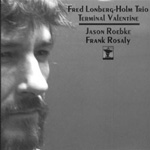 The highly expressive cello is a cornerstone of the western classical canon, yet it remains a marginalized instrument in the jazz world. Chicago-based cellist Fred Lonberg-Holm sits atop a growing list of contemporary innovators playing what is still classified as a "miscellaneous" instrument by many mainstream jazz publications.

Terminal Valentine is Lonberg-Holm's third album in a series originally inspired by the work of cellist Fred Katz, best known as a member of Chico Hamilton's visionary 1950s chamber jazz quintet. A Valentine for Fred Katz (Atavistic, 2002) and Other Valentines (Atavistic, 2005) preceded this date, with each succeeding album making subtle, creative inroads along the way.

A former student of Morton Feldman and Anthony Braxton, Lonberg-Holm's virtuosity and versatility have been well-documented in the past decade, in such ensembles as Anthony Coleman's Selfhaters and God Is My Co-Pilot and Pillow, among others. Possessing a rich, resonant timbre and lyrical phrasing, combined with an unfettered curiosity for expressive textures, his approach is accessible yet adventurous.

With his sonorous, melancholy tone, he can seamlessly transform a rising glissando into dissonant, tortured territory for added emotional emphasis. Underscoring this inside-outside aesthetic are his intuitive trio-mates, who are anything but conventional accompanists. Drummer Frank Rosaly alternates between tumultuous clamor and pointillist sketches, carefully accenting the swinging rhythms with rubato strokes instead of strictly enforcing them. Bassist Jason Roebke provides a rich harmonic foundation for the trio with sensitive, dynamic time-keeping.

Expanding on typical notions of rhythm, melody and harmony, the trio reveals an enticing blend of avant-garde tenacity and pop song tunefulness as lyrically resplendent as it is sonically challenging. This new material features a slightly more muscular and passionate momentum, perhaps reflecting his recent forays with such sonic heavyweights as Peter Brotzmann's tentet, The Vandermark 5 and Italian power trio Zu.

As instrumental impressions of their titles, tunes like "Maybe Its Too Late," "No One Will Ever Be Forgotten" and "There Never Was A Reason" flow together effortlessly, contributing to the album's undercurrent of bittersweet melancholy. Passionate and expressive, Terminal Valentine soars and swoons with raw emotional power and knowing optimism.

Three Note Song; Maybe Its Too Late; And You Smile; No One Will Ever Be Forgotten; Just Don't Listen (To The Birds); There Never Was A Reason; Shift Of the Eye; There's No Way; I Know You; One For The Road.