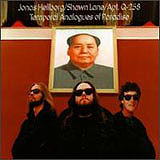 Temporal Analogues of Paradise was originally issued in 1996, it stood the fusion world on its ear. The uncanny melodicism of the three performers—Jeff Sipe being the most surprising—set a new standard for electric improvisation. Jonas Hellborg has now remastered the disc and reissued it on his own label, brightening up the sound for an even more awe-inspiring experience.

Like many of Miles Davis' controversial albums in the 1970s, this disc was assembled from a large number of clips. The two half-hour movements contain both shattering and calm moments from the trio's 1995 European tour, united so seamlessly (most of the time, anyway) that it's hard to believe this improvised miracle wasn't cut whole from one cloth.

The level of musicianship is inarguably high. These veritable chops-monsters are not interested in fire and volume for their own sake, but use dynamics and technique wisely to craft brilliant improvs that turn on a dime. All three men succeed in functioning as both rhythmists and lead players, at times blending into unshakeable, almighty grooves. Their sensitivity towards each other's moods and whims makes this album the great achievement it is. Hellborg characterizes the trio's goal as "truth in music," and that certainly shines through.

Temporal Analogues is not for everyone. Those who like their fusion rigorously structured a la Weather Report may lose interest, or the disc just might open their ears to new possibilities. Whatever the case, this is a most welcome reissue.