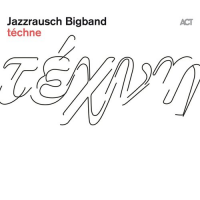 Considering how Jazzrausch Bigband has spent its career shaking the rafters in dance clubs, it may seem a little odd to say things are sounding a bit more modern this time around. The outfit's hard-pounding electronics have always stayed on the cutting edge and attracted an adventurous young fan base from the start. Nonetheless, it's also been common for most of their outings to include something of an old-world theme, from adapting German Christmas carols on their ACT Music debut Still! Still! Still! (2019) to electrifying the Romantic era with the effervescent Beethoven's Breakdown (ACT, 2020).

The all-original téchne shows their electro-jazz whirlwind rooted most heavily in the present and future, although it certainly does not lose the classic ingredients of the band's party mix in the process. There are a couple of passages which would almost fit into a 1940s cabaret if the bass thumps were left out. At heart, "Shuffling Steps" is almost all snappy swing underneath the frisky synths. The exotic "Green Sun" snakes through seductive Eastern scales carried by brass and voices, shifting through enough modulations to merit two impressively different takes.

Most often, though, the whole crazy mix is built from the ground up rather than by layering elements of one style on top of another. "What It Is" has the germ of a slinky spy-movie noir theme woven into a wall of full-out cyberpunk noise, robot voices and all. The opening "Mosaïque Bleu" features a classy trombone solo bookended by hard-swinging walls of horns, although that only comes after a dash of spry funk topped with an almost Euro-pop chorus; with "Decadence," it's a taste of how Moulin Rouge might have sounded if the film had been set a century later in a grimy underground rave warehouse.

Vocals turn out to be a common new element throughout; as if the musical fusion wasn't expansive enough, Jazzrausch also throws in everything from catchy chants to arty voiceover or bizarre absurdist poetry. Through it all, the relentless pulse keeps all the myriad tones in the same focused, hard- driving wheelhouse. téchne's beats never reduce the rhythm to merely static, but ebb and flow as continually as the band's genre shifts. However much you know about either jazz or techno, you haven't heard anything quite like this.