By MARK CORROTO
December 25, 2006
Sign in to view read count 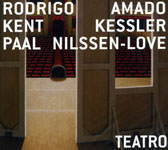 Please just forget that I'm telling you this live recording from 2004 documents the first time these three improvising musicians had ever played together.

Teatro is by Portuguese saxophonist Rodrigo Amado, first heard on the Clean Feed label, in the Lisbon Improvisation Players and with Ken Filiano. He follows in the footsteps of Chicago's Ken Vandermark: certainly his choice of instrumentation, occasionally the baritone saxophone, calls to mind Vandermark. But moreover, it's the sidemen who have made their mark in jazz on Vandermark's bandstand who raise this association. First Kent Kessler, who has been bassist of choice for the DKV band, V5, and Peter Brotzmann's Chicago bands organized by Vanermark. Norwegian drummer Paal Nilssen-Love has also been within Vandermark's sphere on School Days and FME recordings.

The disc opens with "The Iconoclast, a nearly twenty-minute churning force-of-nature track that plays like a two-out bases loaded full-count baseball game. Everything is seemingly in motion: Amado blows a very restrained series of lines that constantly give way to the swirling energies of Nilssen-Love's drum kit. The drummer has en endless supply of accents, taps and pops. Likewise Kessler plays in waves of energy on the opener that make you believe that certainly this band has a long working history.

The title track opens with some scratchy bowed bass, tentative baritone saxophone and some perceptive cymbal work. As on the opener, the trio knows how to properly unfold an improvised composition. The signature track might just be the six minute closer, another choice of baritone, but this one opts for a bit of "chasin'," Coltrane-style. Amado burns a few matches here and there, as does Nilssen-Love, with all the muscular Elvin-beats he can muster. As on the other tracks, this first-time meeting sounds like a much longer-lived association.