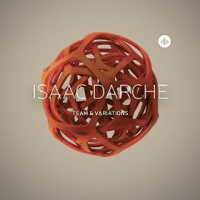 While guitarist Isaac Darche is clearly a fan of punny titles, his music is no joke. On Team & Variations—the follow-up to the California-bred, New York-based guitarist's debut, Boom-Baptism (BJU Records, 2012)—Darche digs deep, delivering five stimulating originals and three classics that focus in on his dexterous finger work, tight arrangements, and kinship with his contemporaries.

Darche and company are clearly locked in from the first notes of "A 'Winkel In Time"—an original that nods to guitarist Kurt Rosenwinkel in name and sound. The guitarist is in sync with saxophonist Chad Lefkowitz-Brown, as this pair takes off for the first of several complex unison flights on the album. All the while, the rhythm section—pianist Glenn Zaleski, bassist Desmond White, and drummer E.J. Strickland—is nailing the hits, following the bends in the road, and creating shifting terra firma.

A strong appreciation for teamwork is apparent throughout, as high-level interplay and empathy rule. A few examples include the way Strickland stokes the flames behind Darche's escapade on "Don't Run Out Of Money"; the manner in which Darche, Zaleski, White, and Strickland are all highly responsive to each other's gestures during a mystery-laced take on Wayne Shorter's "Ana Maria"; and the method(s) by which the rhythm section pokes, prods, and drives Darche and Lefkowitz-Brown, whether those two are operating together or flying solo.

The scales of balance tend to lean toward the cerebral side when the band works through the scripted portions of music. But things even out when the soloists take flight, as they add emotional weight. That's obvious both in relatively straightforward swing scenarios, like "Nobody Else But Me," and in dicey waters. It's that ability to balance intellect and passion that drives this music forward.

A 'Winkel In Time; Sloped Perspective; Don't Run Out Of Money; Ana Maria; Arts Of A Bachelor; Nobody Else But Me; You Stepped Out Of A Dream; Nerds.