By GLENN ASTARITA
September 26, 2009
Sign in to view read count 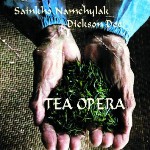 Dickson Dee (Li Chin Sung) is an enterprising artist and businessman, responsible for opening up many doors via Independent label distribution and various production efforts for artists in China, Hong Kong and Taiwan. He's embedded his wares into a global setting, while also recording for John Zorn's Tzadik label on his 1996 solo debut, PAST. An adventurous proponent of avant live electronics, Dee's craft shines radiantly throughout this persuasive collaboration with experimental and highly-regarded Tuvan throat singer, Sainkho Namchylak.

The duo celebrates the holistic attributes of Chinese Tea on this otherworldly extravaganza. Here, Namchylak uses her broad vocal faculties as an instrument that complements and intertwines with Dee's ethereal and rhythmic electronics applications. They paint a multicolored portraiture, teeming with spacey backdrops amid mystical storylines that bob and weave to complement a few bizarre tribal-like passages. Namchylak is an amazing vocalist, possessing razor-sharp control as she also partakes in numerous off-kilter sound-shaping endeavors with Dee.

Namchylak uses a wide spectrum of registers to impart a sometimes, bizarre slant on Asian modalities atop Dee's oscillating metrics, where the latter incorporates analog sine wave manipulations and driving pulses into the grand mix. The twosome generates moody undercurrents amid dark, ethereal and free-form dialogues. On "Ninth Story," they morph noise music with asymmetrical grooves atop a quasi-African pulse, while Namchyluk uses her lower register intonations as a percussion instrument.

With Tea Opera, Namchylak and Dee bestow a highly impressionistic and meticulously designed ode to the aura of Chinese tea.