By JOHN KELMAN
October 4, 2005
Sign in to view read count 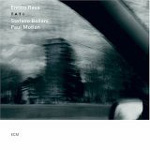 Italian Enrico Rava may arguably be the best qualified trumpeter to carry the mantle of the late Miles Davis' more tender and straightforward side. Last year's Easy Living—his return to the ECM label after a seventeen-year hiatus—found him exploring the kind of approachable yet never less than adventurous post bop territory that Miles might have found himself in had he continued in the direction he was going before forming his classic mid-1960s quintet with Hancock, Shorter, Carter, and Williams. But hidden within the mellifluous exterior of Easy Living is an intrepid player with subtly creative ways to seamlessly embed his vast and diverse musical experience while remaining completely focused.

TATI opens up with an understated and spacious reading of the Gershwin classic "The Man I Love," demonstrating just how much an extension of Miles' bittersweet tendencies can be found in Rava's own chocolatey-rich tone. This trio also features Stefano Bollani, a sensitive and openminded pianist with whom Rava has worked since 1996 in a variety of contexts, and drummer Paul Motian, whose skills as a colourist and intuitive strength at relaxed tempos make him the perfect complement to the already-forged simpatico between Rava and Bollani. They apply equal discretion to Rava's lyrical title track, Bollani's hopeful "Casa di Bambola," and Motian's melancholic "Gang of 5."

Rava has leaned more and more towards a mainstream approach in recent years, with albums that have paid tribute to Miles and Chet Baker as well as Italian film music. However, it's important to remember that he first emerged in the mid-1960s as a free player on albums by artists like saxophonist Steve Lacy, trombonist Roswell Rudd, and the Globe Unity Orchestra. And while time may have mellowed Rava's approach to more openended improvisation, tracks like his sprightly "Jessica Too" and "Cornettology," as well as the darker abstraction of Motian's "Fantasm," show that he's by no means settled into any kind of complacency.

The chemistry between Rava and Bollani is as wide as it is deep. Sometimes as subtle as a deft turn of phrase, other times as blatant as complete synchronicity, their intercommunication is so advanced that it's not really a case of any one driving the other; instead, they seem to move forward in tandem, two aspects of the same voice. Motian's relationship with the duo may be something new. But a fifty-year history of empathic adaptability that never dilutes his own musical voice and a particular strength in the musical space Rava and Bollani inhabit make him the perfect partner, resulting in a triumvirate of almost uncanny singlemindedness.

As undoubtedly strong as Easy Living was, TATI ultimately proves to be a more satisfyingly representative consolidation of Rava's multifarious strengths, demonstrating that one can indeed be a free spirit without losing site of melodic concerns, and that a sense of adventure need not imply sharp-edged or rough surfaces.