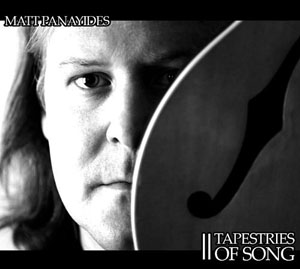 In the era of frenetic fretboard technique, the art of developing a patient groove sometimes seems lost in the shuffle, but Matt Panyides skillfully cultivates that very asset on Tapestries of Song. This is not to suggest that Panyides' music lacks for technical aptitude, as his guitar playing displays nothing but virtuosity. Specifically, Panyides' playing has the unhurried finesse of a craftsman. Teamed with Rich Perry's dexterous tenor sax, and the solid rhythms of drummer Dan Weiss and bassist Steve LaSpina, Panyides has released an intriguing, highly pleasurable disc that combines musical prowess with a deep melodic creativity.

No track better displays this synthesis than "Different Places" which eases in with a laidback solo guitar introduction, before developing into a fuller arrangement ready to support extended solos from Panayides and Perry. "Out of Hands" switches up this format, with Weiss and LaSpina developing the intro groove before Panayides and Perry launch their deft lines with combined fluidity. Throughout the CD, Panayides and Perry exploit this interesting sonic instrumentation, with the guitar sounding almost like an overtone of the tenor sax, as they parse lines in harmony. Inevitably, when one of them departs for the solo, the other backs into a soulful support role that ends up sounding like two hands working separately but in unison, as if one is handling the fork and the other, the knife.

Of the two, Perry's style is the more angular and tension-filled, while Panayides is more melodic and laidback, but each plays off the other in developing their musical explorations. The funky "Why Bail Them Out?" is a good example of each style lending support to the other. Especially interesting here is Panayides' motion between support groove to echoing Perry's melody line. Panayides slides between funky chording and melody line with an ease that adds wonderful texture to the piece. Additionally, Panayides break is filled with an extended exploration of this technique, as he moves from long, single lines to a tossed-in chordal push and back again, before eventually ceding to Perry's solo voice. And Weiss, here, takes a tasty drum break that creates tonal intrigue while adding to the infectious groove.

Additionally impressive is Panayides' compositional quality, contributing all eight tracks to the set. While the tracks share a standard head-arrangement quality, none are lacking in melodic interest, but Panayides' ultimate asset maybe his gift of pacing, which allows the melodic buildup to be as interesting as the harmonic release. Although his approach is definitely more modern and chromatic, his cool-handed gait is reminiscent of Grant Green's loose, agile playing. Combined with Perry's creative force and the innovative pulse of Weiss and LaSpina's, Panayides has produced a solid collection with Tapestries of Song.

Track Listing: Seoul Soul; Out of My Hands; Why Bail Them Out?; Different Place; Amalgamation; Freedom's Illusion; Sketch; Walking Across a Bride (with no money).