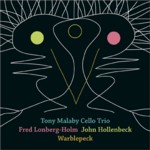 Saxophonist Tony Malaby is rapidly becoming one of the most impressive artists of his generation. With a resume including memberships in Charlie Haden's Liberation Orchestra and Paul Motian's Electric Bebop Band, he has gone from ubiquitous to acclaimed, seemingly overnight. Tamarindo features Malaby fronting a powerhouse trio of his peers, including bassist William Parker and drummer Nasheet Waits.

Malaby's assured tone, rich melodic sensibility and adventurous outlook have endeared him to such notable New York bandleaders as Mario Pavone, Marty Ehrlich and Mark Helias, making him a key player in the Downtown scene. His early solo efforts for Arabesque, Songlines and Sunnyside hinted at his potential, but Tamarindo surpasses them all.

A diverse tenor stylist, Malaby merges the hushed, breathy focus of Joe Lovano with the fervent passion of Coltrane and Shepp—an equal mix of unbridled passion and technical facility. In addition to his usual tenor, Malaby doubles on soprano. His singing tone on the smaller horn ranges from the dulcet quality of a flute to the biting roundness of an alto, sliding between extremes on "Mother's Love."

William Parker needs no introduction, his outstanding bass playing and leadership skills are legendary. Expertly balancing his role as harmonic and rhythmic lynchpin with his own conversational contributions, he veers from hypnotic ostinatos to soaring bowed tones; his arco playing is especially pungent.

Although best know as the primary drummer for pianists Jason Moran and Fred Hersch, Nasheet Waits has demonstrated an expansive reach, recently touring as a duo with German saxophone terror Peter Brotzmann.

Together these three play a mix of fluid, ever evolving tunes. Their attentiveness to endlessly modulating rhythmic shifts, textural dynamics and emotional expression borders on the telepathic.

"Buried Head" reveals a wealth of emotion, opening the album with an epic arc; building from quiet, pensive restraint to frenzied abandon, eventually winding down again. Navigating myriad harmonic twists and turns over expanding and contracting meters, the trio ascends to a climax of rolling drums, pummeling bass and spiraling soprano before Malaby's multiphonic tenor flurries lead the way to a somber coda.

The title track knits a folksy sing-song melody with Coltrane-esque passion as the trio collectively cries out with jubilant frenzy. "Floating Head" spotlights Malaby's reedy tenor smears as he soars over Parker's sinewy Latinized vamp, snapping his strings against the fretboard with visceral glee, while Waits juggles multiple meters, subdividing the syncopated rhythms with a fluid pulse.

A superlative trio session featuring three artists at the top of their game, Tamarindo is Malaby's finest moment on record yet.