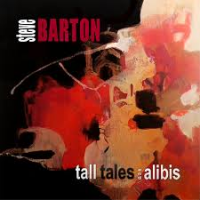 Like Bob Dylan's Triplicate (Columbia, 2017), Steve Barton's Tall Tales And Alibis recounts a rite of passage in three parts. But even though the once and future member of Translator only assigns specific sub-titles once (in the recording credits), his journey from darkness to light is as explicit as that of the Nobel Laureate's, perhaps even more so, as it transits chronologically through a psychic transformation reflected in the recordings.

Barton takes a literal as well as metaphysical approach in his look at the bounty of new material arising from his move to Oregon. A total of thirty-seven tracks appear here, of which all are originals except for covers of "In the Wee Small Hours of the Morning" and the The Rolling Stones' "Dandelion." The first two CD's, 'Star Tonight' and 'Shattered Light,' are virtually solos by the guitarist/vocalist/composer, while a full corps of carefully-selected players (including Barton's Translator bandmates Dave Scheff and Larry Dekker) appear for something of a grand finale on disc three, "Before I Get Too Young."

As evidenced by the darker and often near-whispered "Breath" and "Stare At The Sun Tonight," Steve Barton's exorcising more than a few demons here. The insistent strumming of songs such as "Little Rule Breaker" and "Shadow of the Bride," into which he injects some skewed electric tones that mirror his often exaggerated vocal delivery, insures his liberation, at least to the point he attains a stance more objective (and reflective) than defensive.

Still, as clearly motivated as are cuts like "Levitate the Pentagon," such performances represent tangents from this exposition he's conducting here. "Hey Buster Keaton" is worth preservation because it sounds like something a latter-day lighthearted John Lennon might write, but still might better be left for download from Barton's website, if only for the overall emotional clarity of this expansive work.

The artist clearly wants to be sure he says his peace here, but some more judicious editing might've compressed this seventh solo album of his, particularly since the last compact disc, comprised of the aforementioned ensemble tracks, runs only a little over half an hour; no doubt the co-production of Marvin Etzioni, co-founder of Lone Justice, could shepherd a smooth transition.

Apart from confessional cuts like "I Count the Minutes" and "Haunt Me Tonight," Steve Barton's most effective statements otherwise arrive indirectly in the form of "She Is The Girl" (notably part of his current live sets) and, not surprisingly, "Sweet Sweet Sad Girl:" both of which benefit from the live-in-the-studio recording approach that brings an edgy spontaneity to those performances.

The object of this man's affection may or may not be the source of inspiration for tunes like "Now That We Have Tomorrow" or the conflicting feelings rendered through David Alicke's saxophone on "Guilty of Innocence," but it hardly matters; at least when it comes to the high-profile mastering of Bernie Grundman (and only slightly less so the mixing of Sheldon Gomberg), the multi-textured sound quality vividly mirrors the mixed emotions that Steve Barton proffers in largely penetrating fashion on Tall Tales And Alibis.

CD 1 Album: One: Star Tonight; How Can I Believe?; Little Rule Breaker; Shadow of the Bride; I Only Want To Be Your Clown; Evolution; When She's Lost Your Mind; Dawn; Light Of An Eclipse; That Picture Of You; Levitate The Pentagon; Vacantville; Hey Buster Keaton; You're A Star Tonight. CD 2: Shattered Light: Breath; Northwest Girl; From The Rain; I'll Still Be Loving You; Unalone; I Count The Minutes; Haunt Me Tonight; Tearing Out The Roses; In The Wee Small Hours Of The Morning; Don't Think It Over; Untie Your Blindfold; Stare At The Sun Tonight. CD 3, Album Three: Before I Get Too Young; Wake Up Roses; Little Strange One; She Is The Girl; Guilty of Innocence; Gimme Your Hand; The Day My Baby Went Blind; Sweet Sweet Sad Girl; Where Did I Go Wrong; Before I Get Too Young; Now That We Have Tomorrow; Dandelion; I Fly.