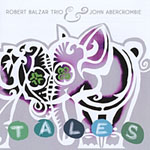 Releases teaming unknown musicians with high profile players can be inherently suspect. Everyone has to pay the rent, so it's always possible that such sessions are taken on for strictly financial reasons, with the playing as impeccable as ever but lacking in the commitment that turns a good date into a great one. Still, that's not always the case, and however John Abercrombie ended up on this date, from the first notes of Czech bassist Robert Balzar's Tales, it's clear that the guitarist is as invested in the music as Balzar's trio, also including pianist Stanislav Mácha and drummer Jiří Slavíček.

Co-produced by another Czech bassist with much higher visibility, Weather Report co-founder and ECM recording artist Miroslav Vitous, it's further evidence that vibrant jazz can be found in unexpected places. While a European impressionism imbues the date, so too are traditional markers that make Abercrombie—a forward-thinking player who nevertheless reveres what's come before—a perfect fit.

Three rarely covered Abercrombie tunes from across the guitarist's career are also inspired choices—the gently swinging "Just in Tune," from Open Land (ECM, 1999), the melancholy, rubato tone poem "Remember Hymn," from Getting There (ECM, 1988), and the lyrical waltz "Sing Song," taken at a brighter tempo than the original, first heard with Abercrombie's Gateway trio, featuring bassist Dave Holland and drummer Jack DeJohnette, on Gateway 2 (ECM, 1978). More than the fact that much has changed in Abercrombie's own approach over the years; the piano-guitar-bass-drums line-up is one that Abercrombie rarely uses, making these versions harmonically richer than the originals.

Abercrombie's warm, occasionally slightly overdriven tone and melodically focused solos weave as seamlessly through the complex changes of Balzar's contrapuntal "Night," as they do the bassist's simmering, modal "Tale," helping to elevate this session beyond a mere guesting date. But Balzar's trio is on equal footing throughout, and while the bassist's own writing leans a tad more towards convention, there's plenty of challenge to make Tales a thoroughly modern mainstream set. Balzar possesses an earthy tone that rivals Abercrombie's, and a strong sense of construction that makes his solo on "Tale" an early highlight of the set, while Mácha and Slavíček demonstrate equal breadth on the ECM-like transparency of "Remember Hymn," the direct, backbeat-driven groove of "Portissimo" and the lighter in complexion but equally fiery "Black Cat White Dog."

Abercrombie is featured, but the strength of Balzar's trio ensures that he never dominates. Instead, it's a democratic session filled with surprise, elegance and invention that may have Abercrombie as its initial drawing card, but turns out to be even more rewarding for the discovery of three Czech musicians deserving of far greater exposure.