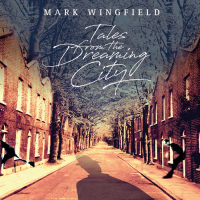 British guitar virtuoso Mark Wingfield is one of the linchpins of the ever-expanding Moonjune Records roster, and his relationship with bassist Yaron Stavi and drummer Asaf Sirkis (both Israeli-born, now based in the U.K.) has been especially fruitful. All three played on the acclaimed improvised album The Stone House (Moonjune Records, 2017) along with touch guitarist Markus Reuter, as well as on Wingfield's previous album Proof Of Light (Moonjune Records, 2015). This is a powerful set of Wingfield originals (plus one improvisation). They are joined by special guest Dominique Vantomme, heard most recently on Vegir (Moonjune Records, 2018) as synthesizer soloist on four of the ten tracks.

"The Fifth Window" starts things off with an energetic theme, Wingfield's distinctive strangled whammy-bar assisted lines riding atop his soundscaping. This is typical of the whole program: he is credited with "guitar, soundscapes," and his soundscapes do indeed function like a fourth member of the basic trio. The tune has a dramatic pause in the middle, after which the theme returns, this time over an arpeggiated soundscape. "I Wonder How Many Miles I've Fallen" serves as a showcase for the entire band. A soundscape that sounds like a string section opens it, and after the first guitar solo Stavi contributes a lyrical fretless bass solo. Sirkis plays a powerful drum solo with the accompaniment of a soundscape of layered guitars. Some of the many high points in the rest of the set start with the yearning theme of "Sunlight Cafe:" Wingfield's compositions include beautiful melodies, and are far more than mere blowing vehicles. "Looking Back At The Amber Lit House" features the second of Vantomme's synthesizer solos, followed by a lovely chordal wash "solo" from the leader. The synthesizer solos are unmistakable classic single-line solos with a mini-Moog sound, in a high register to differentiate them from the guitar. So they provide a bit of contrast, without altering the well-established band dynamic.

"At A Small Hour Of The Night" is the group improvisation, with a somber, rubato mood in line with the title. It opens with the sound of footsteps opening a door—shades of Pink Floyd—and closes with the same sound, after an atmospheric exploration by the whole band. In addition to The Stone House, Wingfield and Sirkis have already produced Lighthouse (Moonjune Records, 2017) another successful improvised album (again with touch guitarist Markus Reuter). This track makes a good case for another improvised session with this trio. 'Ten Mile Bank" finds the guitar and bass doubling during the theme. There is an interesting contrasting rhythmic section, and a high "whistling" synth solo. Closer "The Green-Faced Timekeepers" has an effective ending with Sirkis' unexpected konakol singing (the South Indian method of performing percussive rhythms with vocal syllables). It works very well, despite the absence of audible Indian techniques in the rest of the track.

Tales From The Dreaming City is an excellent showcase for Mark Wingfield as bandleader, composer, soloist, improviser and soundscaper. He has the full support of an equally virtuosic band. And it is also a fine introduction to the MoonJune Records catalog, which is rich with recordings like this.

The Fifth Window; I Wonder How Many Miles I've Fallen; The Way To Hemingford Grey; Sunlight Cafe; Looking Back At The Amber Lit House; This Place Up Against The Sky; At A Small Hour Of The Night; A Wind Blows Down Turnpike Lane; Ten Mile Bank; The Green-Faced Timekeepers.