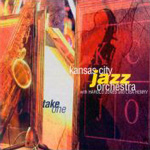 The debut recording by the Kansas City Jazz Orchestra marks the pinnacle of a dream come true for cofounders Jim Mair and Gene Hall—a repertory orchestra comprised of top-notch musicians from the Kansas City area, patterned after others around the country with local sponsors, a board of directors and national grants to lend financial support. After honing its chops during three highly successful concerts, the band entered KC's Soundtrek Studio in November '04 to establish a more permanent record of its burgeoning prowess.

Keenly aware of the long and glorious tradition of big band jazz in Kansas City, the KCJO was eager for the challenge, and everything seemed to fall neatly in place. Deciding on a name for the album was easy, as most numbers were neatly wrapped up on Take One. And what better way to open a KC-style session than with Benny Carter's "Vine Street Rumble, building a solidly swinging groove in which everyone is loose and comfortable.

Later on, the band offers a trio of snappy salutes to the legendary Count Basie, a founding father of the Kansas City school of big band jazz—the Count's classic "One O'Clock Jump, Freddie Green's "Corner Pocket and Neal Hefti's "Cute (the last showcasing guest drummer Harold Jones). Duke Ellington is represented by his composition "Come Sunday and Billy Strayhorn's "Take the 'A' Train.

Clark Terry's "Tee Pee Time is a cooker, with solos to match by tenor Doug Talley, trombonist Paul McKee and trumpeter Stan Kessler. Kessler's burnished flugel is featured with pianist Charles Williams on Lennon/McCartney's "Michelle and with baritone Theodore Wilson on Ernie Wilkins' "Jenny. Williams and tenor David Chael are out front on "Rumble, Mair (alto) and Doug Talley (soprano) on "'A' Train, Talley (tenor) and trumpeter Steve Molloy on "Corner Pocket, flutist Bob Long and flugel Bob Harvey on "Sunday, Williams, Talley and flugel Jay Sollengerger on "Jump. The KJO has a splendid vocalist in Lisa Henry, and she acquits herself well on "I Just Found Out About Love, "We'll Be Together Again and "You Make Me Feel So Young, with sturdy support from the orchestra.

The studio recording is bright and clear, although the brass is a tad too distant at times (at least on my headphones), while the less-than-lavish 47:41 playing time is at least acceptable for a first effort. In fact, an admirable enterprise all round for the rosy-cheeked KCJO, and, one would hope, a harbinger of more memorable adventures yet to come.

Vine Street Rumble; I Just Found Out About Love; Take the