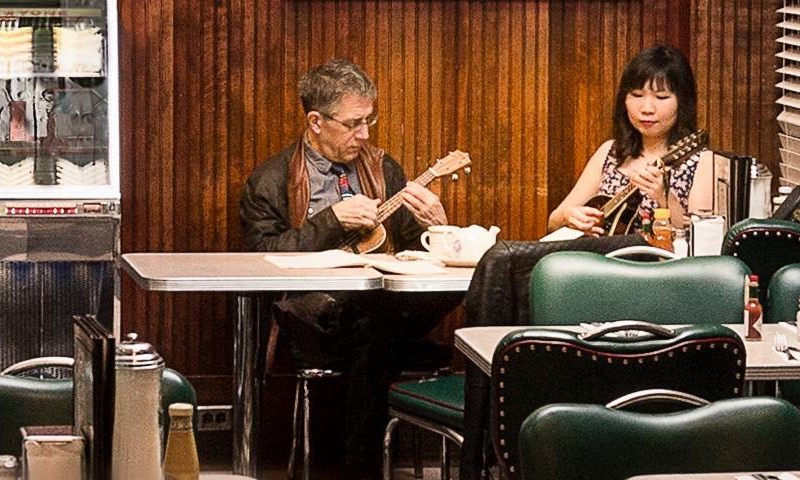 By 23RD HOUR
April 27, 2017
Sign in to view read count
About 23rd Hour
For singer-songwriters and multi-instrumentalists Sherry-Lynn Lee and George Paolini, a chance meeting at an open mic transformed unlikely bedfellows into sympathetic artistic souls.

Together now, the duo, who perform under the moniker 23rd Hour, announces its debut album—Perfect Strangers—a body of original compositions and jazz standards that melds eclectic and urbane musicality with pop accessibility and poetic sentiments.

Both are gifted instrumentalists, proficient on guitar, piano, mandolin, harmonica.

It has been a transformative two-year journey for Sherry and George. "The fact that we got together seems almost magical to me. It's changed me for the better," George says.

Sherry, who first approached George after he had performed at a Bay Area coffee house, adds: "The lesson I've learned is it never hurts to ask."

Teachers and/or influences?
We just started working with Tuck & Patti. They are definitely an influence and it's a great privilege to be studying with them.

I knew I wanted to be a musician when...
Sherry: I saw Beverly Craven singing and playing piano on TV in 1992. At 4 years old, I already loved singing but I had never seen somebody play and sing at the same time. I wanted to be able to do that.

George: I was 14 years old. I had been playing and writing my own songs for four years by then. I was walking home from school one day, making up and singing a song. It just hit me that that was the thing I enjoyed doing more than anything. I never had the notion of being the "rock star." I just wanted to make music my profession.

Your sound and approach to music.
George: We are both drawn in by strong melodies and lyrics that are witty and tell a story. We are less concerned about the particular genre: jazz, rock, pop, classical, folk. We'll blend them all to create our sound. We like a very clean, natural, organic approach. We don't use a lot of signal processing or electronic effects. The true test for us is we have to be able to play and sing a song unplugged. The rest should be adornment, not a critical element of the composition and performance. That's not to judge others who might take that approach. It's just not our thing.

Sherry: Our songs reflect us very much. At first glance, we are two very different people, an unlikely pair. We come from different backgrounds, different generations, grew up on different genres of music. Most people don't know what to expect when they see us walk on stage for the first time. Then we start playing and all the pieces fall into place. His jazzy, syncopated chord progressions are met with my classically influenced legato piano riffs that bring a different but complementary element to the song. Our harmonies are often an octave apart, our voices equal yet distinct. We're not converging one way or the other, but rather juxtaposing our two worlds in a way that we both appreciate. We're not afraid of trying out new elements. We hired a phenomenal pedal steel player and added a country flair to a few songs during our trip to Nashville, for example. Then we went to Mauritius and did a singer-songwriter take on a Mauritian Sega piece.

Your dream band
We talk a lot about this. Because we switch instruments and genres continually, we work as a duo and when needed, we'll borrow or hire other musicians for gigs. We were in San Francisco a bit ago and popped into a small unassuming club where a jazz trio was playing. One guy was switching among myriad instruments throughout the night: trumpet, saxophone, violin. That's our ideal band member.

Road story: Your best or worst experience
We did some recording in Nashville, where the bassist looked at our chart and said "Hey, that's a "sus V add 6. I haven't seen that chord in Nashville, since, well forever."

We once played a wedding as a favor for friends. The newlyweds and their family & friends were very health conscious, so no alcohol was served at the reception. Turned out to be a great event. We never had to deal with belligerent drunks who were sure they could belt out "My Way" after 20 glasses of wine.

On the flip side, we were busking one night until the wee hours. A group of guys walked by and were "three sheets to the wind." They heard Sherry singing and one declared her voice was "purer than water."

One of the trio's inebriated friends insisted that nothing could be purer than water. This went on for about 15 minutes. We just played and laughed. This is now a running joke and good candidate for a song title one of these days.

Favorite venue
Last year we were lucky enough to get a slot at the open mic at the Bluebird Cafe in Nashville. We had heard so much about that open mic we just had to see for ourselves. We arrived at the restaurant to see a line going around the block. We figured, as with most open mics, these were other musicians trying to get a slot. Not the case! This was the line to be in audience. When the show started, you could have heard a pin drop during the performances. It's a listening audience. It doesn't get any better than that.

In our area (San Francisco Bay Area) we like Art Boutiki in San Jose and Angelicas in Redwood City. They have acoustic grand pianos and great sound systems and the customers/audience are there to listen.

Your favorite recording in your discography and why?
Sherry: That's a bit like asking a parent to pick their favorite child! I guess if I had to pick a recording that I'm particularly happy about, it would be "So Good." That's one song that I felt really came alive in the studio in a way that surpassed our expectations. I can't help but move to the beat when I hear it.

George: Forget. It was the first song we recorded for the album. We recorded it in two live takes. Jeff, our engineer, got me this really nice clean sound for the guitar, which I like. We had a nice groove and it felt like everything was clicking... And I didn't have to sing.

What do you think is the most important thing you are contributing musically?
We have a joke that our night isn't successful until we have made someone cry. More seriously, we want to move people. That's what music is about.

The first jazz album I bought was:
George: Lofty Fake Anagram, by Gary Burton with Larry Coryell and Steve Swallow. I bought the vinyl in a used record store when I was a teen.

Sherry: Ella and Basie! by Ella Fitzgerald & Count Basie, which I bought after meeting George.

Music you are listening to now:
George: Tuck and Patti, Steve Tyrell, Chick Corea. Our friend Gary Meek has a new album about to be released and we have been listening to that.

How would you describe the state of jazz today?
George: Vibrant. We cherish the old, embrace the new. I grew up with traditional Big Band jazz in my home but came of age when Fusion was the rage. I'm not a big rap or hip hop fan but I can appreciate that rap borrows from the Beat poets and Hip Hop can put its rhythm underneath complex jazz chord structures. That's all goodness to me.

Sherry: Inspiring. It's inspiring to see so many brilliant artists being successful, touring and putting out new music. I listen to our local jazz station KCSM when I'm driving and I'm always discovering new artists to add to my collection. It's also refreshing to witness the different blends of jazz. Jazz is a bit like wine. Everybody has a different take on it. I am the complete opposite of a purist, so I love the fact that diversity is so celebrated in jazz.

What is your greatest fear when you perform?
George: Chick Corea will walk in and ask to sit in on a set. Not much chance of that happening so I don't worry much.

Sherry: Opening my mouth and not being able to sing.

If I weren't a jazz musician, I would be a:
George: Etymologist.

Sherry: Ethnomusicologist, studying the effects/roles of music on the brain, and its role in the development of society and culture, etc.

If I could have dinner with anyone from history, who would it be and why?
George: Lucy, although I'm not sure what we'd have to talk about given our age difference of 3.2 million or so years and language differences, if she spoke at all. And if we could get past those hurdles, not sure we'd be able agree on where to dine.