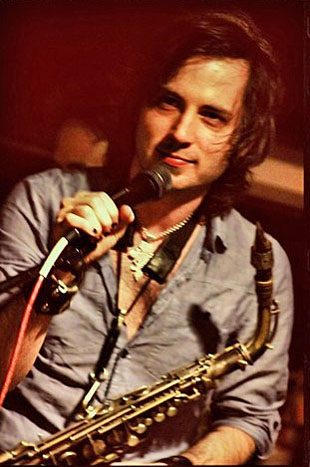 Stretch is about going beyond the boundaries created by the old gatekeepers and rejecting the preset notions of what rock, hip-hop and jazz are.

With the changing landscape of music, so many bands that pull our ideas about music in different ways feel the need to use multiple genres to classify themselves.

Stretch is mostly, but not completely, instrumental music that stretches traditional ideas of rock and hip-hop while infusing them with the virtuosity of jazz. It takes familiar song forms, harmonies and beats and "stretches" them to create a level of intensity and discovery that's different each time you hear it.

"Stretching" is what musicians do while improvising when they want to raise the intensity and take the music in a new undiscovered direction. As a genre, Stretch is about doing that in all aspects of music.

I knew I wanted to be a musician when...
I first made a sound on my saxophone

Your sound and approach to music:
I am an instrumentalist and Stretch Musician. I am part of the generation taken advantage of by the myth that college leads to a more financially secure existence.

As a stretch musician, our goal is to compete with other forms of popular music while still keeping musical integrity.

Your teaching approach:
No two students are the same. I teach by example and try to show students that a high level of playing is possible at an early age.

Your dream band:
I am very lucky to be working with my dream band, Beaumont.

Road story: Your best or worst experience:
When I see how great musicians touring in other forms of popular music live on tour (I have personally seen the behind the scenes with Sting for instance), I wonder why the great instrumentalist in the jazz community have settled for so little.

Favorite venue:
I have played at the Apollo, Carnegie Hall, Birdland, Iridium, Blue Note—on and on. I must say, my favorite gigs have been at loft parties and other events where I get to perform for large groups of people my age!

Having people sit, eat dinner, and watch us play is not going to bring the music into the future.

Your favorite recording in your discography and why?
Jimi Hendrix, Band of Gypsys.

It's very rare that you get to hear a true original be able to revolutionize their instrument while being socially and politically relevant.

The first Jazz album I bought was:
Michael Jackson's Bad, all of popular music started with jazz, and Quincy Jones' musical genius is a product of the jazz community.

What do you think is the most important thing you are contributing musically?
The Stretch Movement. A chance for the greatest instrumentalist in the world to shed the word "jazz" and help create new avenues to reach younger audiences and to once again be relevant in today's music marketplace.

Did you know...
I am a twin, and my brother Joe Beaty's J POP Big Band Morning Musuko won MTV Iggy's artist of the week beating a major label backed rapper that had topped the iTunes charts in Korea. He did this without having a CD available for sale.

CDs you are listening to now:
Hipster Assassins, Maschinenmensch, and Zaccai Curtis.

How would you describe the state of jazz today?
Dead. A music predominantly supported by arts funding and education, instead of actually selling albums, has slowly withered to nothing. I have worked with Grammy nominees that can't get their albums funded in the jazz world. During the renaissance of the '90s, the later part of Miles Davis' career was portrayed in the media negatively as compared to traditionalist such as Wynton Marsalis. History will soon prove Miles Davis' insistence on staying current and competing with other forms of popular music would have been a much better path to follow than relying on education to bring interest back into the music.

What are some of the essential requirements to keep jazz alive and growing?
Rebranding! The Stretch Movement will not go away; I have paid my debt to jazz in the form of inflated tuition prices. None of us owe jazz a life of poverty. Jazz will always be survived by men like Wynton Marsalis. The instrumental virtuosity of the jazz tradition is sellable, but the word "jazz" limits all hopes to gain a younger following. Talk to any record executive (that has sold records), say the word "jazz," and watch the door close.

Then, on December 3, 2011 at 8 PM at the Delancey in NYC, Felix Pastorius , Chris Ward, Zaccai Curtis and I will be debuting the Stretch Genre to New York audiences. $10 for the entire night, 21 and over.

By Day:
After my video interview with Bret Primack, the Stretch Movement has become a 14 hour a day job!

If I weren't a jazz musician, I would be a:
A lawyer to battle the cost of education in America and put an end to student loans. Living in New York and having been down to Occupy Wall Street, it is clear a huge issue is how children born in the early '80s were taught all through grade school to excel, to go to college, to get a degree, to have a better life. Many of us paid, at minimum, $60,000 to $100,000. Starting a four-year degree today at a private school can cost close to $200,000, and that is for a jazz degree. There are so many reasons this has happened, but it must change for the future of America.