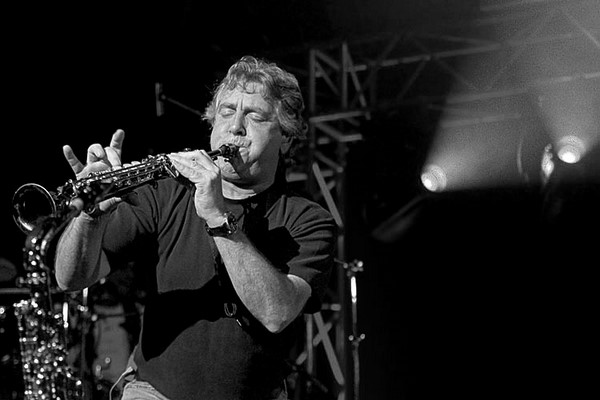 First Jazz Memory: "I met Cannonball Adderley when I was 12. He did a school performance around where I lived and I was just blown away."

Inspirations: "The greats of jazz. My mother [Lorraine] was an opera singer and my father [Leonard] was a huge jazz fan, he just loved jazz. He turned me on to Charlie Parker, Miles Davis and Lester Young. He said he played jazz for me when I was in the cradle."

Last Book Read: "We were in Italy last week so I read a book, The Italian Renaissance, by J. H. Plumb. Wherever we travel I like to read about the place where we are. We played The Blue Note in Milan, so I read about Michelangelo, Da Vinci and the Italian renaissance."

Hobbies/Leisure Activities: "I'm a hiker and camper. I love the woods. Love eating my dinner over an open fire on the top of a mountain. Also, love books, history and science."

Favorite Movies: "Oh boy...Shawshank Redemption—I love that movie. Star Wars. I like science fiction. As far as classics—Citizen Kane. I like that movie."

Musical Tastes: "That's a tough question. I still like some of the mature artists in the pop scene—Prince, Sting, John Mayer. Marvin Gaye. James Brown. As far as new music, I'm not as enamored with the music scene as I was in the past."

First Job(s): "Working in my dad's knitting mill in the metal shop. I remember blowing dust with a compressed air gun, keeping the knitting machine from having lint build up. I also worked for a chain link fence company, installing chain link fences. And clamming."

Favorite Meal: "A steak over an open camp fire."

Pre-Performance Feeling: "In the beginning—always nervous, but not anymore. Now it's...anticipation. Anticipation of fun. Yeah."

Greatest Career Moment: "Playing Carnegie Hall, just a few months after being a bar band, convincing my parents that I wasn't wasting my time."

Most Painful Career Moment: "We did a show in Miami, Florida where two of the guys didn't make it. It was a 'show must go on' kind of thing. We used two local guys who said they knew our material. We trusted them, and it was really a train wreck. Two hours of, 'Oh my goodness.'"

Most Memorable Performance: "Well, there are so many of them. I think playing Red Rocks with Miles Davis in 1981. [Any interaction with Miles Davis?] Miles was pretty much to himself. We were highly respectful. We were his support act although we closed the show. We always sent him flowers and champagne every night before the shows we did with him, thanking him for his music. He was such an important artist. After about four shows, he popped his head in the door and said, 'Spyro Gyra, you're okay,' Our jaws dropped. It was a shock Miles spoke to us."

Funny Career Memory: "Playing in Bali, Indonesia on a stage made of bamboo, set up on the beach. Somebody didn't understand the tides and we found ourselves surrounded by water [laughs]."

Performance(s) You Were At Your Very Best: "North Sea Jazz Festival 2001 in The Hague, Netherlands. Dutch TV actually made a tape of it and I got to hear it. The band really sounded great. I only knew it because it was taped. We have so many great nights."

Last Vacation: "At home [Pomona, MY]. Because my work is in Italy and everywhere else, my vacation is home. We travel so much. I love to be home."

Childhood Dream: "A saxophonist—can you believe it? A jazz musician. Aside from playing shortstop for the Brooklyn Dodgers, like Pee Wee Reese. So I got one of my wishes."

People Qualities Most Admired: "Kindness. And awareness of other people's feelings. Someone that has empathy and sympathy."