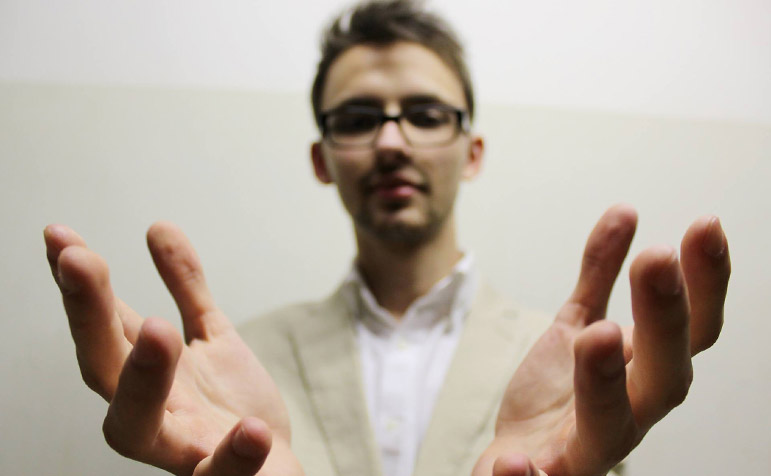 By EDGARS CIRULIS
August 13, 2016
Sign in to view read count
About Edgars Cirulis:
Edgars Cirulis is an up and coming pianist and composer from Latvia. This year he released his first album Ainavisti - with a group he created and is leading since 2014. Edgars is currently studying at Jazepa Vitola Latvian Music Academy, doing his second year of bachelor studies. Outside his regular group he plays with various jazz musicians from Latvia and is now looking to further his bounds outside of his country.

Instrument(s):
Mostly just piano, but recently I have started to dabble with various synths and having a lot of fun with it. Looking forward to incorporate them in my music.

Teachers and/or influences?
I have had many teachers and influences over the years and every single one of them has given me a lot of inspiration and helped steady my direction. The teacher I have spent the most time with and who really went out of his way to help me find my own sound is Raimonds Petrauskis. He was the one who motivated me to try composing and if it weren't for him, I most certainly wouldn't have put out an album with my own music. The greatest influence could be Esbjorn Svensson. After listening to his music for the first time I decided that I wanted to take on the daunting and scary path of musicianship. To this day I still listen to his recordings to keep myself going.

I knew I wanted to be a musician when...
I found out how much fun it is, really. I studied music since I was six and, until I was 16, sort of did it because I had to. After finishing primary education I had to choose a school to go to. I knew that I would like to study something with creativity involved and music/piano was the only thing I knew so I just went with it. Once I found about jazz my love for music increased greatly.

Your sound and approach to music:
I know that some people pay special attention to creating their own sound and designing their approach. I can't say that it is true for me. It happened naturally, but I think that the greatest help most certainly was composition. I think that composing directly reflects your "inner musician" and it kind of centers all of your influences in one sound. Nevertheless, as any other musician, I am still working on my sound and I can safely say that there won't ever be a point in my life where I can say: "That should do it.." As for my approach: stay true to yourself and always be sincere, make the best out of any situation you are given.

Your teaching approach:
Never force anything. Let the student find the things he needs to learn himself. All you really need to do is to point them in the right direction or more so gently nudge them. I am a big fan of the metaphor where all the things/concepts/ideas you are taught are defined as seeds. The teacher needs to plant the seeds and the student decides for himself which ones to nurture and grow.

Your dream band:
Ideal band almost sounds like an utopian dream, but, if we are shooting for the stars here, I would love to see (and play with) Wayne Shorter, Ambrose Akinmusire, Brian Blade and Larry Grenadier. Each one of them individually has given a lot to the music world, and I really think that together they could shake up something good. But to be honest, the two artists that I would like to play with the most are without a doubt the 1+1 duet: Herbie Hancock and Wayne Shorter. Their outlook on life and philosophy has made a huge impact in my own worldview and, if for nothing else, I would like to hang out with them just to thank them for everything.

ADVERTISEMENT
Favorite venue:
Can't say that I have found one yet. Each one comes with their own pros and cons. I think that you can work with almost anything you are given, and if you try to keep an aware and open mind, everything turns out great (or just gives you a great memory/fun story to share).

Your favorite recording in your discography and why?
Ainavisti -. As it is my first and for now only recording in my discography. If I were to change the direction of the question to "My favourite track from your discography and why?" I'd say it would be "Home," since it paints a great and very personal self image of who I am. A lot of it was purely spontaneous and I think improvisation acts as a mirror of your true self. So there you have it.

What do you think is the most important thing you are contributing musically?
Myself. The one and only thing I can give that no one other can. So I am trying my hardest to make sure somebody finds it interesting.

Did you know...
I really dig animation and animated movies. My favorite animation studio is Studio Ghibli and their movies are a great inspiration for me. My favorite one is The Wind Rises.

How would you describe the state of jazz today?
It is really defining itself as an art form. I can't say there are enough listeners though. This just my opinion, but I think it is because there is a negative connotation that comes bundled with the word "jazz," people expect and are looking for a certain sound when they think about jazz. For some people jazz means "saxophone," for some, "swing," and for others, "loud and messy." Sometimes I feel the term is a little loose and vague, therefore people get lost in the broad spectrum of styles and sounds it can offer. For me jazz represents a certain kind of a feeling, less so of a genre. I think that some time will pass, before people accept jazz as it is right now, and forgo the stereotypes.

What are some of the essential requirements to keep jazz alive and growing?
Keep on keepin' on. Nothing else really. Play truthfully and with great love and remember that whatever you do is for others, so make sure you don't leave them out of the boat.

What is in the near future?
I have a great duet going on with my great friend and bassist Janis Rubiks. I am having the best time of my life working with him and I can't wait to bring something out for the public. I also want to mention a trio Search for Light, also with Janis and a one of the most sincerest and joyful singers, Kristine Liede. We are currently considering doing a record this or the next year. And finally, continuous work on my band: Ainavisti. A lot of things are planned. And I can't wait to see how things will pan out.

What song would you like played at your funeral?
"Adagio for Strings" by Samuel Barber

What is your favorite song to whistle or sing in the shower?
"Mo' Better Blues" by Bill Lee.

If I weren't a jazz musician, I would be a:
Something that still has a lot to do with creativity. Maybe I would have picked up drawing and tried to become an animator.