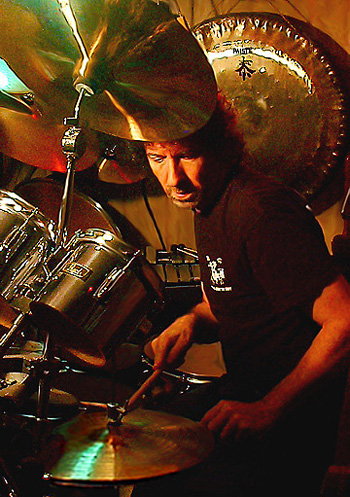 I would like to thank All About Jazz for allowing me to speak a bit more about myself and the music that I write...

I began playing drums at age 11 and expanded into piano about two years afterwards. Been playing both ever since and have added all sorts of goodies in-between. I love improvisation and enjoy classical music, as well as composing film score music. But my roots are firmly planted into jazz-rock and fusion. I've been told the combination has produced some nice results. I've had some success and people seem to like what I do, so I keep at it.

I knew I wanted to be a musician when... I saw a drum set for the first time.

Your sound and approach to music: It has changed dramatically over the years. I find that as I have matured, my approach has added great strength to my reasoning for why I compose what I do and the way I do it, and patience to work out my musical thoughts in much greater depth. But at the same time, I retain a free will to improvise and allow for mistakes that sometimes turn out to be a good thing in the long run.

I do mostly studio recordings currently, but in the past, I must say that I've had a blast playing in New York. Some of the classic clubs that no longer exist such as the Limelight or the Ritz come to mind.

The first Jazz album I bought was: Dave Brubeck Time Out.

What do you think is the most important thing you are contributing musically? Unquestionably, my soul.

How would you describe the state of jazz today? If I had to say it in a few words, I would probably have to say "full of opportunity." The world in general has gotten much smaller, thanks to the use of the internet. And jazz musicians are being given a great option to express themselves in ways that they would not have been able to in years past. All About Jazz is a perfect example of this. Look at all they do to give opportunity to jazz musicians to be heard. There are no boundaries anymore. The listener is free to choose jazz from an endless spectrum of styles, thanks to sites like this.

And because of that, the musician is able to experiment with those styles in ways that have never been heard before, not only giving the musician the freedom to compose as he or she wishes but to be heard as well. Like I said, the state ofjJazz today is full of opportunity. That can only be a good thing.