Zim Ngqawana has been hailed by Johannesburg's leading daily paper, The Star, as "The most visible, hardest working younger man in jazz." He is one of the new generation of South African musicians who are taking a fresh look at South Africa's jazz and traditional music heritage. Zim made his mark at the historic Inauguration of President Nelson Mandela in 1994, where he directed the 100 person 'Drums for Peace Ochestra', led an elite group of 12 Presidential drummers and featured as a solo saxophonist.

This recognition came after a late start and some tough struggles. Born in 1959 in Port Elizabeth (in South Africa's Eastern Cape), Zim was the youngest of five children who started playing flute at the age of 21. Although Zim was forced to drop out of school before completing university entrance requirements, his prowess won him a place at Rhodes University. He later went on to study for a diploma in Jazz Studies at the University of Natal. 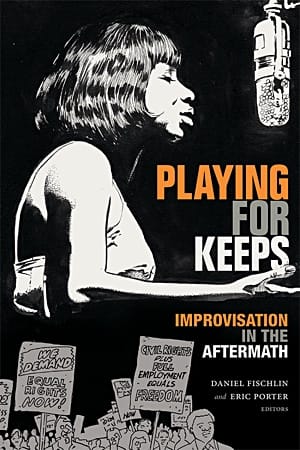 Playing For Keeps: Improvisation In The Aftermath Edited by Daniel Fischlin & Eric Porter 352 Pages ISBN: 978-1-4780-0814-9 Duke University Press 2020 Musical improvisation is often described as a conversation. A universal language. Musicians trading back and forth seem to be having a blast, which, on occasion, for ...

The Cape Jazz sound of South Africa is known to international audiences primarily thanks to the music of pianist Abdullah Ibrahim. However, the music and traditions of Cape Town and the Western Cape run much deeper, reflecting an extraordinary, sometimes contradictory, and exceedingly complex set of cultures and traditions reflected in the area. Within this environment ...

South Africa celebrated its first democratic elections in April 1994, entering a new phase of its history. During that decade, an incredible new array of Jazz artists emerged in the country, exploring Jazz's role in the New South Africa. Playlist Bheki Mseleku “Closer to the Source" from Celebration (World Circuit) 2:03 Paul Hanmer ...

South African pianist, composer, and vocalist Thandi Ntuli entered 2018 not with a bang, but with a thermonuclear blast. At the close of 2017, she had been selected as the recipient of the 2018 Standard Bank Young Artist Award in Jazz, anointing her as the latest figure in an incredible lineage of South African ...

Throughout this decade, pianist, composer, and bandleader Bokani Dyer has stood as one of the most formidable and creative keyboard talents in South Africa today. Raised in a musical family--his father is the legendary saxophonist Steve Dyer--Bokani Dyer quickly demonstrated an extraordinary musical vision and identity of his own. Indeed, albums of his, notably Emancipate the ...

Over the past three weeks we've focused on Africa's influence on jazz music. We played music by international jazz musicians who were inspired by Africa as well as music by jazz musicians from Mali to Tunisia and from Ethiopia to Zimbabwe. Now what about South African Jazz? Well, we left South Africa for last ...

Though it has not received the level of press attention it warrants, South Africa's Jazz scene of the past decade has experienced an astonishing flourishing of artistry and development. While the scene lost some of its titans like Zim Ngqawana, Winston Mankunku Ngozi, and Bheki Mseleku, it has also found new paths through the efforts of ...

South African guitarist and composer Vuma Levin has been receiving significant accolades in local and international circles, and it's easy to see why. A thoughtful, intelligent improviser and bandleader, Levin is also a highly thought-provoking composer, one intent on exploring the music's role in commenting on and shaping societal discourse. Indeed, with last year's ...