If music could exist outside of time--not as in rhythm, but as in the time-space continuum--then it might sound like the glassy, ice-hot pianism of Yaron Herman. How did he get to inhabit this spare soundscape in almost suspended animation? Perhaps it is because he is powered by the magic of an uninhibited soul--that and the ...

Muse is Yaron Herman's fourth album and with it the Israeli-born/French-based pianist continues his steady progress towards a mature post-Keith Jarrett, post-Brad Mehldau style and the certainty of world ranking. Still in his late twenties, Herman set out his stall with the piano/drums duo album Takes 2 To Know 1 (Sketch, 2005), which was followed by ... 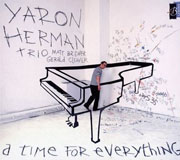 Sometimes the power of a back story can eclipse the music it supports. For Israeli-born pianist Yaron Herman it's a close call, but A Time for Everything is such a refreshing and multifaceted album that a little background is necessary. Herman, still in his mid-twenties, began playing piano at sixteen, a shift ...