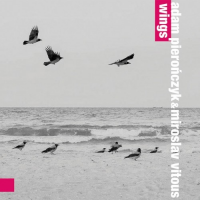 Based in Krakow, Poland, saxophonist Adam Pieronczyk crafted, in 2010, perhaps the finest recorded tribute to his countryman, Krzysztof Komeda, with Komeda: The Innocent Sorcerer (Jazzwerkstatt). Komeda was a seminal Polish jazz man who shifted his focus to soundtrack work, most famously with film maker Roman Polanski, and most notably on the 1968 psycho-horror movie, Rosemary's ...