Pongsakorn Lertvanitsutha was born December 2, 1991, in Bangkok, Thailand. He began playing trumpet at age of 11. In 2010, he was admitted to Jazz Faculty at College of Music, Mahidol University. In 2014 he graduated Bachelor of Music with first Honor. In 2015, he continued to study Trumpet Performance in Bachelor of Arts with Prof. Jim Rotondi at University of Music and Performing Arts Graz, Austria. In June 2017, he graduated his second Bachelor of Arts and continue to study in Master of Arts. In 2009, He won 2. prize at Thailand Trumpet Competition in Bangkok, Thailand. In 2013, He won 3 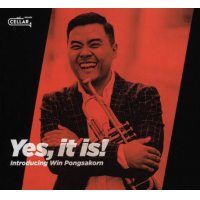 Label: Cellar Records
Released: 2020
Track listing: Green and Yellow; If I Should Lose You; You’re So Beautiful That; I Think She Likes Ketchup; Dear Little Daisy; First Snow in Graz; November 21; Mama Used to Say.

Neon Jazz is here for during the COVID-19 pandemic. This week we start the show with the young and very talented Joey Alexander and wrap it up with the late, great Ellis Marsalis. Support the jazz and enjoy the music. Playlist Joey Alexander “Warna" Warna (Verve) 00:00 Host talks 7:03 Wallace Roney “Children's Games'" ...

Win Pongsakorn: Yes, It Is!

Although it may take a while (if ever) for Pongsakorn “Win" Lertvanitsutha to become a household name outside his native land, the twenty-nine-year-old trumpeter from Thailand makes an impressive debut on Yes, It Is!, a buoyant studio session, recorded in Italy, that makes room for a brace of guest appearances by Pongsakorn's mentor, Jim Rotondi. Besides ...