Results for "When She Smiles" 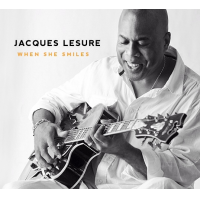 Azure is a Netherlands-based quartet formed in 2006, and When She Smiles is its second release. Nine original compositions--seven penned by pianist Pierre-Francois Blanchard, and two by guitarist Rogier Schneemann--take the quartet through lyrical terrain. Although there are no overbearing influences on the music, there is a classical jazz overtone to much of the playing, and ... Album: When She Smiles
By Martin Van Blockson
Label: Self Produced
Released: 0
Duration: 04:23

When Pierre-Francois Blanchard (piano) and Rogier Schneemann (guitar) met at the Royal Conservatory of The Hague in 2006, they forged an immediate musical bond. Shortly thereafter they pulled in David Barker (drums) and Eric Heijnsdijk (bass) to form Azure. The band released their debut recording There Were Stars (Azuremusic) in 2007. On their second release, When ...