Warren Galea is a Maltese multi-instrumentalist and composer based in Brooklyn, New York. In May 2019 he released his debut album - The Odyssey, featuring Warren on guitar, Andy McKee on bass and Adam Nussbaum on drums. Past performances include The Blue Note Jazz Festival, Nublu 151, ShapeShifter Lab, the Jazz Educators Network Conference 2019 (JEN) , the Malta Jazz Festival and 'Les Sons d' Une Ile' Festival (Paris). In 2014 he was awarded first place in the Malta Jazz Contest. The following year he released an EP with F-Trio. Recently graduated from the New School for Jazz and Contemporary Music, his biggest five influences are Mozart, Charlie Parker, The Beatles, Frank Zappa, and Jimi Hendrix. 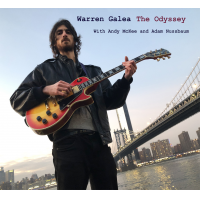 In the second part of this week's episode (for the first part click here) we continue our exploration of new releases with music by the likes of Gerald Cleaver, David Sánchez, Raffaele Casarano and Mirko Signorile as well as the return of veteran guitarist Steve Khan. Happy listening! Ben Allison ...

Great music from the Aum Fidelity label with new albums from William Parker and Whit Dickey together with a selection of other recent releases and some classic “Bird." Playlist William Parker in Order to Survive “Eternal Is the Voice of Love II" from Live/Shapeshifter (Aum Fidelity) 00:00 Whit Dickey Tao Quartets “Peace Planet" from ...

Featured this time around is a great new album from “supergroup" Out to Dinner featuring Behn Gillece, Michael Dease. Tim Green, Boris Kozlov and Rudy Royston. Also featured a great meeting between Terkel Nørgaard and Ralph Alessi plus a selection of other excellent new music including a preview of the long awaited release of Miles Davis ...