Master musician and multi-talented blues performer, Vanessa Collier, was recently nominated for a 2017 Blues Music Award (BMA). The Philadelphia based vocalist/saxophonist/songwriter is currently on an 11 country European tour with Ruf’s Blues Caravan, alternating between tour legs in Europe and touring back in the U.S. with a talented 5-piece band, throughout 2017. With searing saxophone solos, soulful vocals, and witty lyrics, Vanessa’s songwriting takes you through an engaging blend of blues, funk, rock, and soul in an exceptionally entertaining, high-energy performance. A graduate of the Berklee College of Music, Vanessa’s alluring vocals and stinging saxophone work saw her light up stages as part of Joe Louis Walker’s band (2012-2013), while her 2014 debut album Heart Soul & Saxophone was declared “magnificent” on Dan Aykroyd’s blues radio show, winning her accolades as a Best of 2014 Blues Breaker. With the success of her debut album and her charismatic live performances, Vanessa has been in demand touring throughout the world and is excited to celebrate the March 2017 release of her highly anticipated sophomore album Meeting My Shadow. Vanessa also maintains a private saxophone studio teaching around 30 students per week 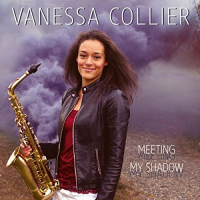 Label: Ruf Records
Released: 2017
Track listing: Poisoned The Well; Dig A Little Deeper; When It Don’t Come Easy; Two Parts Sugar, One Part Lime; When Love Comes To Town; You’re Gonna Make Me Cry; Whiskey And Women; Meet Me Where I’m At; Cry Out; Up Above My Head, I Hear Music In The Air; Devil’s On The Downside.

During the golden age of rhythm and blues, the saxophonist, who often doubled on vocals, was the leader of the band, and the star of the show. Fast forward, and we find Vanessa Collier who is all of the above, and also a genuine quadruple threat. With an honored degree from Berklee, and having spent several ...