Triosence, Bernhard Schüler (piano) with Matthias Nowak (bass) and Stephan Emig (drums) has become one of the most successful jazz bands in Germany. Formed in 1999, Triosence has won numerous jazz competitions and national jazz awards such as winner of the national jazz competition “Jugend jazzt”, “1st Ostsee Jazz Festival Prize”, and a CD recording contract with the German national radio network, “Deutschlandfunk”. Their first CD, “First Enchantment” received fabulous critics in Germany as well as abroad and was nominated for the "Preis der Deutschen Schallplattenkritik". The second CD "Away For A While" stayed in the German International Jazz Charts for over 6 Month

Triosence may not yet be a household name among jazz aficionados in the United States, but since the turn of the millennium, they have become a fixture of the German jazz scene. In addition to performing internationally, they take a distinctly cosmopolitan approach to their sound. Past albums have shown the trio intermingling aromas of Asia, ...

Label: Charleston Square Recordings
Released: 2012
Track listing: I Can't Explain; Summer Song; You're My Spring; Morning Star; Like The Wind; Only One Evening; Only Friends; Maybe There's A Prince Waiting; You'll SeeYou; You Alone; Let It In; Where Time Stands Still. 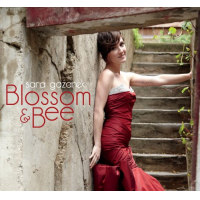 Vocalist Sara Gazarek was in a recording slumber for the past half decade, but 2012 seems to be the year that this sleeping jazz vocal beauty finally awakens. She eased her way back into the ears of her fans with Where Time Stands Still (Charleston Square Recordings, 2012), a collaboration that paired her with Germany's Triosence, ...

Triosence is a piano trio active on the European jazz stage since making a name for itself in its native Germany in 1999. On When Time Stands Still, the band joins forces with West Coast jazz vocalist Sara Gazarek for a recital of twelve original tunes. The music is mostly penned by Triosence pianist Bernhard Schüler, ...

A commanding recording that delivers an itchy, irresistible attraction for repeated playing is rare, indeed, and Where Time Stands Still falls precisely into that category. Repeated renderings display additional highlights both instrumentally and vocally. It is very appealing--if not challenging--listening. Combining a trio of fine German musicians (Triosence) with an intriguing American (Sarah ...

Half a world may separate Germany's Triosence and California singer Sara Gazarek, but the possibility of making beautiful music together helped to bridge the gap between both parties. When Bernhard Schüler, the pianist in this Cologne-based cooperative trio, contacted Gazarek via e-mail in 2008 to propose a collaboration, this project might have seemed like a long ...

Away For A While