The BBQ Trio was founded in spring 2004 when Matthew Beaudet, Jean-Michel Berube, Vincent Quirion and had fun at the inevitable return of the great Django Reinhardt at the Café College student Lionel Groulx. Grand Prize winner of 2009 Young Musicians' Council of Culture of the Laurentians (CDC), "favorite" of FGMAT 2006 (Festival of guitars in the world in Abitibi-Témiscamingue) and also the Beau Monde Festival 2009 in Quebec Eymouthiers in France, the trio has carved out a place in the jazz emerged in Quebec and abroad. In 2008 the band released their debut album "CINÉMANOUCHE" essentially consists of arrangements of hit movies and TV as "The Simpsons", "Mario Bros.", "Greensleeves", "Star Wars", "Harry Potter ".. 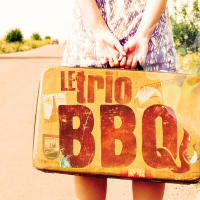