Trombonist, composer and arranger Tom (Mac) McIntosh was born and raised in Baltimore. After a stint with the army, he attended Juilliard and later became an active participant in the New York jazz scene as a trombone player and writer. Upon the death of Billy Strayhorn, Duke Ellington asked McIntosh to be his assistant. He was a member of the famous Jazztet organized by NEA Jazz Masters Benny Golson and Art Farmer, and was one of the founders of the New York Jazz Sextet. Many outstanding NY-based instrumentalists of the 1950's and '60's migrated in and out of the band including Thad Jones, Art Farmer, James Moody, Tommy Flanagan, Roland Hanna, Richard Davis and others

Dmitry Baevsky: The Day After 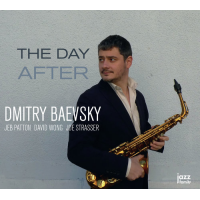 Imagine a group that, in large measure, references the bebop revolution of nearly seventy-five years ago, yet steers clear of the pitfalls of nostalgia, hero worship, and blatant imitation, and ultimately wins the day with an adroit blend of teamwork and compelling individual voices. For those who believe that nothing good can come from contemporary players ...

Best known as the volatile saxophonist in bassist Moppa Elliott's self proclaimed terrorist be-bop band Mostly Other People Do the Killing, Jon Irabagon has only just begun his career as a solo artist. His bristling duet with drummer Mike Pride, I Don't Hear Nothin' But The Blues (Loyal Label, 2009) was preceded by Outright! (Innova, 2008), ...

With Malice Toward None

Label: IPO Recordings
Released: 2004
Track listing: The Cup Bearers; The MVP; Ruptures in the Rapture; Minor Consolation; With Malice Toward None; Balanced Scales Equal Justice; I

Tom McIntosh: With Malice Toward None

Like bassist Percy Heath, who finally released his first album at the age of 80, trombonist Tom McIntosh has waited for his own record. Something of a musician's musician, over the past 45 years McIntosh has spent a lot of time playing with and contributing compositions to a wide range of artists, including James Moody, Dizzy ...

Tom McIntosh: With Malice Toward None

Since the start of bebop, Tom McIntosh has been writing the kind of music that swings with a rhythmic flair and a cool sensation. Perky syncopation combines with a gentle, lyrical flow to make his pieces stand out as representative of the genre. The all-star ensemble that IPO Recordings assembled for this 2003 ...