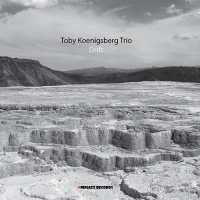 On Sense, the Toby Koenigsberg Trio approaches jazz from intriguing angles, bringing an exciting energy and edginess to both originals and standards. The group's preferred organizing principle can be described as deconstruction by addition. The pianist/leader approaches Bud Powell's “Oblivion by artfully inserting bits and pieces of the melody like someone would assemble a jigsaw puzzle: ...

On Sense, pianist Toby Koenigsberg's trio offers up a wistful and straightforward take on the American Songbook classic “My Foolish Heart," including a poignant, spare reading of the familiar melody. However, everything else on the disc pushes the boundaries.The trio opens and closes the set with tunes by the New York-based trumpeter Andre Canniere: ...