Results for "The Nighthawks"

2016 Blues Music Award Winner Billy Price first attracted national attention during his three-year association with guitarist Roy Buchanan. Price is the vocalist on two of Buchanan's LPs, That's What I'm Here For and Live Stock. Since then, with the Keystone Rhythm Band, the Billy Price Band, and solo projects, Billy Price has recorded and released a total of 16 albums, CDs, and DVDs. In April 2016, he was officially recognized and inducted as a Pittsburgh Rock ’n Roll Legend at an award ceremony. Price’s album This Time for Real, with the late Chicago soul singer Otis Clay, received a 2016 Blues Music Award in the category of Best Soul Blues Album of 2015

The Nighthawks: Tryin' To Get To You

With Tryin' To Get To You, their thirty-first album in a prolific near fifty-year career, the Nighthawks provide testament to their own longevity and that of the blues genre itself. Even regular turnover of personnel has not diminished the power and efficacy of this group's playing, perhaps because, as new members come and go, founding member ...

All You Gotta Do 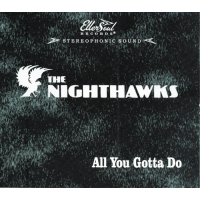 Label: Eller Soul Records
Released: 2017
Track listing: TRACKS That's All You Gotta Do; When I Go Away; Baby, I Want To Be Loved; Let's Burn Down The Cornfield; Another Day; VooDoo Doll; Ninety Nine; Three Times Your Fool; Isn't That So; Snake Drive; Blues For Brother John; Dirty Water.

On All You Gotta Do, The Nighthawks illustrate how they've established, then nurtured their vaunted status among the most venerated of American blues units for over four decades and upwards of twenty albums. The changes the band's seen under the tutelage of original founding member Mark Wenner continues unfettered on this self-produced album: the band alternately ...