Results for "The Civil Surface" 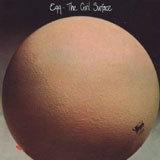 First achieving prominence with seminal progressive/Canterbury group Egg, it was with Hatfield and the North that British keyboardist Dave Stewart matured into a more jazz-centric writer/player. That said, Egg's first two discs--Egg (Nova/Deram, 1970) and The Polite Force (Deram, 1971)--demonstrated a remarkably mature voice for someone who, alongside equal contributors Mont Campbell (bass, vocals, French horn) ...