Terry Disley was born in London. He studied Piano and theory of music at the Salterton School of Music from the age of 9-18. He studied piano for 12 years studying classical repertoire, as well as jazz, composition, harmony and arranging for 10 years. In 1982 Terry and his group Macondo received the award for Best Jazz Musician’s of the year from the Greater London Arts Association. He started composing at age 11 and by 13 was writing for his own electric/acoustic chamber group. Terry has gone on to write for a multitude of ensembles. Including string quartets, electronic contemporary dance music, jazz big band, ambient new age music and contemporary pop songs. In 1997 he composed the music for the motion picture ‘Monument Avenue’, a Ted Demme film which premiered at the Sundance film festival. He also wrote 2 compositions for the Grammy Award nominated “Back on the Case” album by British new age jazz group Acoustic Alchemy, with whom he toured and recorded for six years 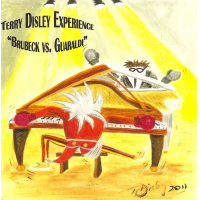 When The Beatles first emerged at the forefront of The British Invasion, few could have predicted the impact they'd have beyond the world of rock and pop. Early albums, and songs like “Love Me Do," “She Loves You" and “I Want to Hold Your Hand," were hardly the grist for something more. But by ...