Since first catching the world’s attention as winner of the Yamaha award at The Montreal International Jazz Festival in 1983, jazz guitarist and composer Sylvain Provost has become a prominent and renowned force on the Canadian and International Jazz scene. For over 25 years, Sylvain has participated in countless events, as soloist, or lead of his own Trio, as concert performer and studio recording artist, and as sideman, arranger, and co-producer. Along with his long-time bass partner, Norman Lachapelle, he has produced a host of recordings, winning nominations and awards, including the Opus Awards and a “Félix” award for best jazz album at ADISQ in 2001. His fluid and sparkling style, his exceptional talent for improvisation, and his vibrant melodic interpretations have won him the respect of his peers and the accolades of jazz lovers everywhere. Past and present collaborators include Oliver Jones, Karen Young, Gerry Boulet, Paul Brochu, Michel Donato, Sylvain Lelièvre, Normand Guilbeault, François Marcaurelle, Terez Montcalm, Yannick Rieu, Jean Vanasse, Coco Zhao and Jean-Pierre Zanella. Sylvain also showcased his versatility and creativity when he played with Edouard Lock’s Dance company “La La La Human Steps” on its world tour from 1990 to 1994, and with Jean Vanasse and Chinese jazz singer Coco Zhao on an Asian tour in 2006. On his new album Désirs Démodés (EFFENDI Records-release date June 2009), Sylvain introduces us to his new Trio, while adding to his repertoire the more melodic composition he is famous for, featuring the sensuality and contrasts of differing guitar “voices.” His long time friends and colleagues, musicians Guy Boisvert on doublebass and Alain Boyer on drums, join him on this new journey. Sylvain Provost has been a recording musician of “Effendi Records” since 1999, and a “LaBella” strings promotional Artist. 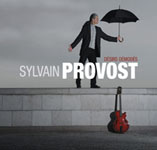 Sylvain Provost Désirs Démodés Effendi Records 2009 If you've been among the very best in your chosen field (of jazz piano) over a long career, there will inevitably come a time when what you say carries as much weight as what you play. So when pianist Oliver Jones, ...

Sonority, not tradition, centers the music on Ni Un Ni Deux. The rich blend of Norman Lachapelle's upright bass with Sylvain Provost's acoustic guitar (plus percussion help from Pierre Cormier) anchors the duo as they stretch across musical boundaries. It makes for great sounding music, if uneven jazz. The pair sounds happy, mostly. The vibe is ...